Line 5 alternatives report is out – all 379 pages of it 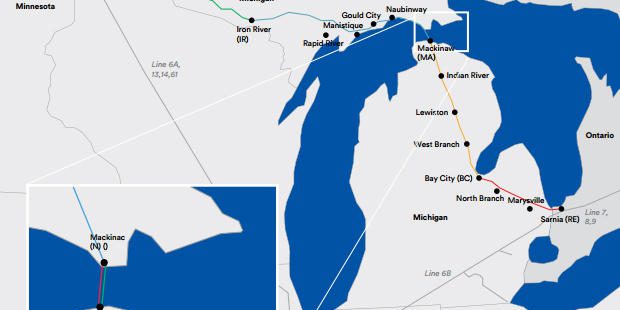 A final state-commissioned report on alternatives to Line 5 is out. People are looking for those alternatives because the pipeline runs under the straits of Mackinac, and a spill could be catastrophic. The highly technical report from Dynamic Risk Assessment Systems claims the overall risk of a spill from Line 5 is very small. Most people worry about the pipeline losing its protective coating, or metal fatigue caused by stresses from the strong currents, but the report claims the greater threat is a ship anchor striking the pipeline. The alternatives considered range from an expensive $2 to $3 billion new pipeline that avoids the Great Lakes altogether to constructing a new section of the pipeline across the Straits in a trench or tunnel. That alternative would cost between $30 to 150 million, according to the analysis.
Another alternative is just shutting Line 5 down and dealing with the consequences, which could mean losing about half the state’s current source of propane. The clock is now running on public comment on what the state should do about the situation. People can submit their ideas until December 22. There will also be three public hearings:

Line 5 alternatives report is out – all 379 pages of it

A final state-commissioned report on alternatives to Line 5 is out. People are looking for those alternatives because the pipeline runs under the straits