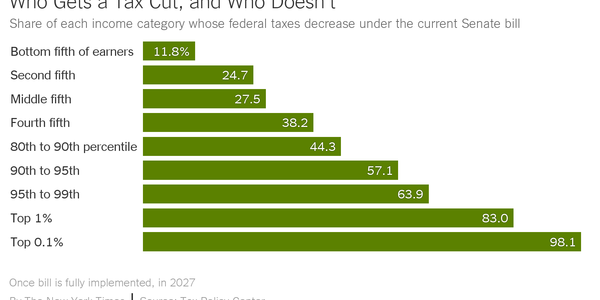 Each time Congress makes major changes to its tax bill, the independent tax experts who analyze bills need to do another analysis. Yesterday, the Tax Policy Center came out with a new overview of the Senate bill, and it was brutal. You can see a summary in the chart at the top of this newsletter.
In brief, 98 percent of households making at least $5 million (roughly the top 1/1,000th of the income distribution) receive a tax cut by the time the bill is fully implemented. Only about 26 percent of those making less than $150,000 a year (roughly the bottom 4/5ths of the distribution) get a tax cut.
The tax bill has a few decent ideas scattered in it. But it is, at root, an enormous tax cut for the very rich, financed by a combination of middle-class tax increases and deficit increases.

The collapse of coalition talks on Sunday doesn’t mean the country is collapsing. But it does show how much the far right has changed German politics.