We Can Help Make Sure Students Vote 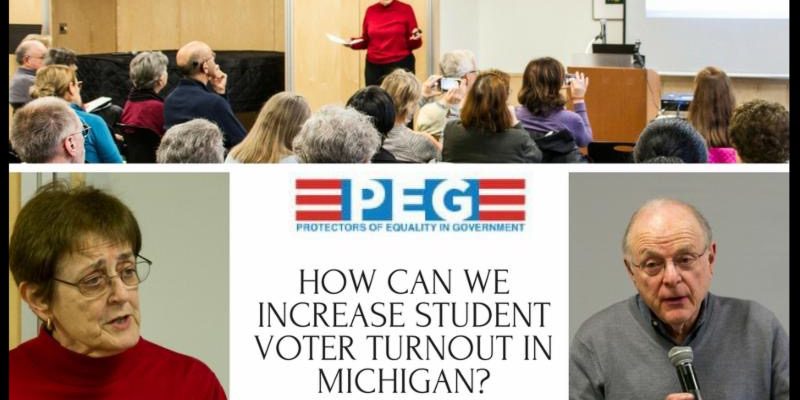 That is the conclusion of Edie Goldenberg, University of Michigan professor and founder of Turn Up, Turnout (TUT), an organization focused on getting out the college vote. In her PEG talk on Sunday, November 12, she highlighted the other shameful statistic: Only 45% of undergraduates at the University of Michigan voted in the last presidential election and 14% in the recent mid-term election. This ranks it at the bottom of a host of comparable size public universities.

Goldenberg’s mission here is to redress this campus problem so students who attend the U-M become citizens who get in the habit of voting as soon as they come of age. Working with U-M President, Mark Schlissel, who’s issued a Big Ten Voting Challenge, they will issue two awards: First, to the university which has the highest percent of students voting; second to the campus whose percent of student voting has improved the most.

It’s worth noting that according to Goldenberg, many of the faculty members she interviewed — as well as attendees to the PEG talk, who are generally better informed than average — are confused, even vague on details of the voting process and the responsibilities of elected officials, including the legislators, attorney generals, and secretaries of state. If we are confused, so must be the newest generation of potential voters.

Goldenberg encouraged everyone in attendance to help with TUT’s important mission. TUT’s goal is to reach undergraduate and graduate students in every school and department at every Michigan university and across the country. To assist with their efforts, contact Edie and complete the volunteer info card.