What EPA chief Scott Pruitt promised — and what he’s done 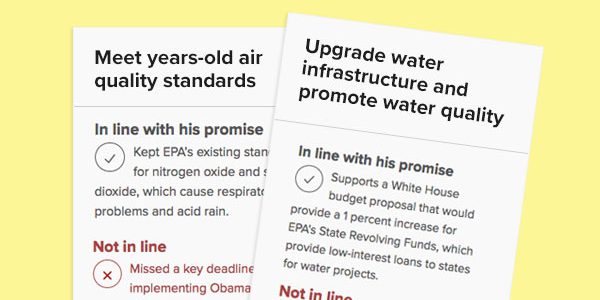 The Environmental Protection Agency administrator came into office promising to discard his predecessor’s “overreaching” focus on climate change and concentrate on what he called the agency’s real mission: cleaning up the air, water and land.

But instead, Pruitt has rolled back or stalled environmental protections, given the fossil fuel and chemistry industries more sway over public health decisions and taken steps that critics fear will undermine work on pollution cleanups, according to a POLITICO analysis of what he’s accomplished to date. He says he will be tough on environmental crimes, but his agency is also easing up on enforcement and collecting far less in penalties than previous administrations, according to agency watchdogs.

Pruitt is the most unorthodox EPA administrator in decades, an avowed critic of the agency who has alienated much of his career staff.

What EPA chief Scott Pruitt promised — and what he’s done

For Scott Pruitt, “back to basics” has translated to “back off.”