Opinion | The Men Who Cost Clinton the Election 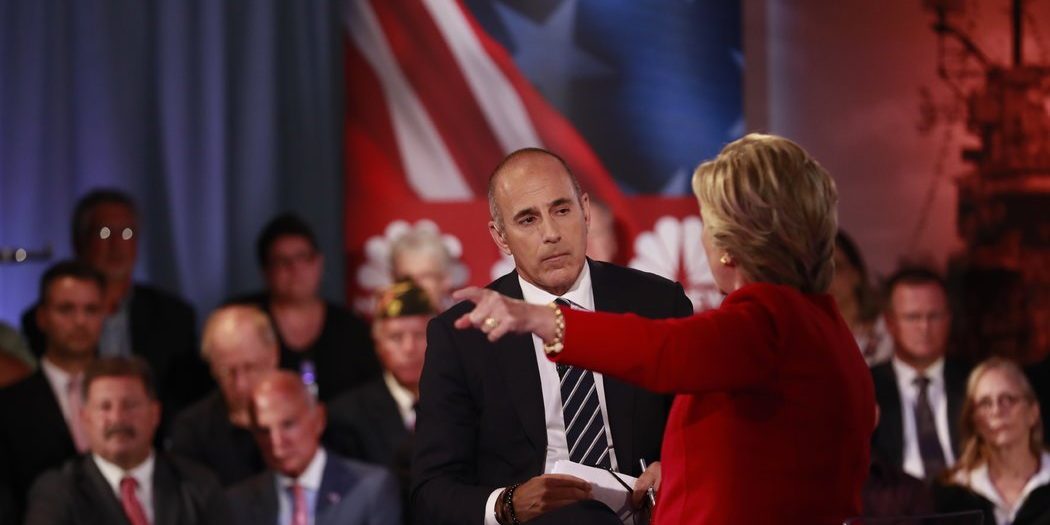 Many of the male journalists who stand accused of sexual harassment were on the forefront of covering the presidential race between Hillary Clinton and Donald Trump. Matt Lauer interviewed Mrs. Clinton and Mr. Trump in an official “commander-in-chief forum” for NBC. He notoriously peppered and interrupted Mrs. Clinton with cold, aggressive, condescending questions hyper-focused on her emails, only to pitch softballs at Mr. Trump and treat him with gentle collegiality a half-hour later. Mark Halperin and Charlie Rose set much of the televised political discourse on the race, interviewing other pundits, opining themselves and obsessing over the electoral play-by-play. Mr. Rose, after the election, took a tone similar to Mr. Lauer’s with Mrs. Clinton — talking down to her, interrupting her, portraying her as untrustworthy. Mr. Halperin was a harsh critic of Mrs. Clinton, painting her as ruthless and corrupt, while going surprisingly easy on Mr. Trump. The reporter Glenn Thrush, currently on leave from The New York Times because of sexual harassment allegations, covered Mrs. Clinton’s 2008 campaign when he was at Newsday and continued to write about her over the next eight years for Politico.

Opinion | The Men Who Cost Clinton the Election

Many of the journalists who stand accused of sexual harassment covered the 2016 presidential campaign.