Stark Partisan Divisions Over Russia Probe, Including Its Importance to the Nation 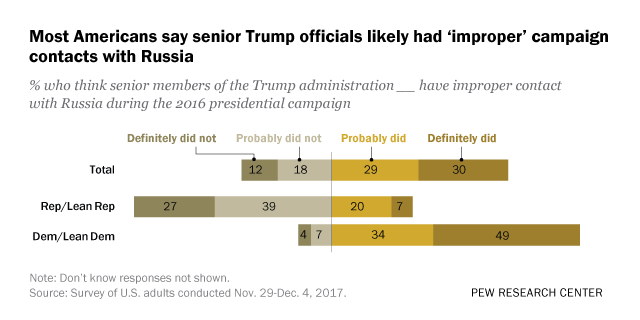 Republicans and Democrats are deeply divided in views of possible wrongdoing by senior administration officials, as well as in confidence in Mueller to conduct a fair investigation. In addition, while just 19% of Republicans view the Russia probe as “very important” to the nation, more than three times as many Democrats (71%) say the same.

The new national survey by Pew Research Center, conducted Nov. 29-Dec. 4 among 1,503 adults, finds that President Trump’s job approval rating has declined over the course of his first year in office.

Stark Partisan Divisions Over Russia Probe, Including Its Importance to the Nation

A majority of Americans say they think senior members of Donald Trump’s administration definitely or probably had improper contacts with Russia during last year’s presidential campaign.