‘It’s Our Responsibility to Put More Guardrails Around the President’ 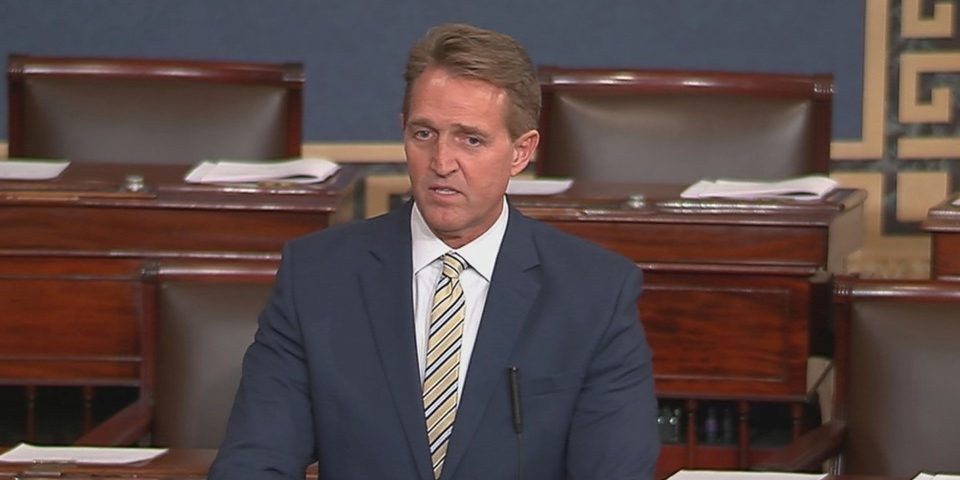 Jeff Flake seems intent on finishing his Senate career without any friends left in Washington.

Ever since announcing his impending retirement last year with a blistering speech that called out President Trump’s “reckless, outrageous, and undignified behavior,” the generally genial Arizona Republican has repeatedly made himself a target of condemnation on both sides of the aisle. His decision to endorse Democrat Doug Jones in the Alabama Special Election enraged conservatives who viewed it as a brazen partisan betrayal. His vote for the GOP tax bill, meanwhile, convinced Democrats that he was all talk and no action.

Flake took fire from both sides this week when he took to the Senate floor to denounce Trump’s vilification of the free press and his “sustained attack on the truth.” The speech—delivered hours before the president unveiled his “Fake News Awards”—drew heat from Republicans for its invocation of Joseph Stalin, and derision from Democrats, who accused him of performative moral preening without any substance behind it.

I met with Flake in his Capitol Hill office the day after his speech, and talked to him about what he hoped it would accomplish. He told me he understood why some Republicans would bristle at his Stalin reference, and said he wasn’t comparing the two men’s sins. “Do I think Trump is a dictator? No, he isn’t,” Flake said. But “if the president were to want to go that direction,” he added, it would be crucial that America’s key institutions—like Congress and the press—remain strong. He also told me that some of his most meaningful opposition to Trump’s agenda has taken place behind the scenes.

“I do think that it’s our responsibility to put more guardrails around the president,” he said. “That’s part of what drove this speech.”

‘It’s Our Responsibility to Put More Guardrails Around the President’

Senator Jeff Flake explains his speech on the Senate floor in defense of the press—and talks about what he’s planning next.