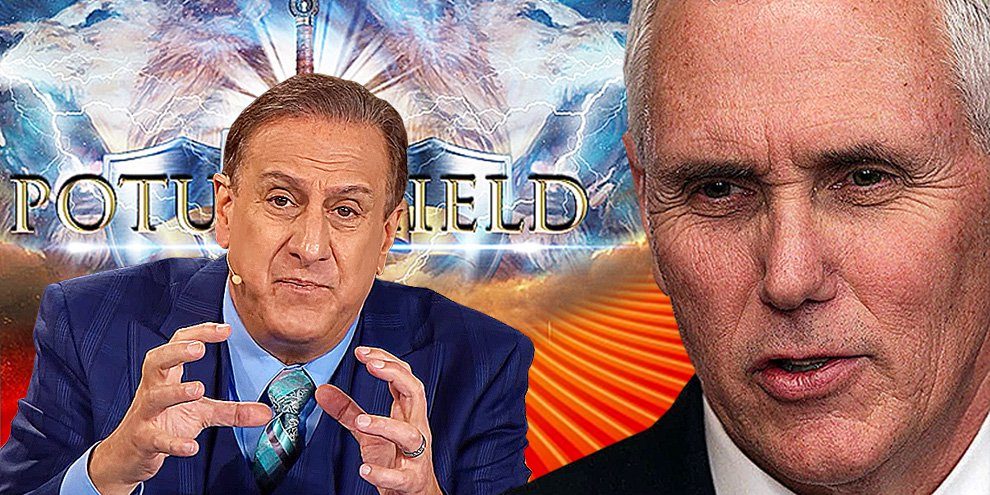 On January 4, Mike Pence and his wife Karen hosted a small dinner for a group of Christian leaders in their official residence at the Naval Observatory. One of the guests in attendance was Frank Amedia — founder of the POTUS Shield network, a group that believes President Trump was anointed by God – and believes government should be run by right-wing Christians

The White House released a photo of the dinner, and Right Wing Watch reported that Amedia announced the gathering in an email blast saying he and other religious right activists enjoyed “a very small and intimate dinner meeting with Vice President Pence and his wife Karen.” Amedia said they discussed an evangelical event March 20-22 in Branson, Missouri, hosted by televangelist Jim Bakker.

Amedia wrote in the email, “I perceive that this timing is critical and strategic as I have been advising that I have received that February is a time of chaos in our nation politically. With flashpoints on the coasts and in the heartland, as well as the caution of the ‘ides of March’ looming which will try to swallow up the spiritual surge of progress and pierce the heart of our political and church reformation.”

The email also reminded followers that Mike Pence and his wife “are keenly aware” of the POTUS Shield’s work and asked Amedia to thank his followers on behalf of the Pence and Trump for their “relentless commitment to be a shield and weapon of spiritual force.”

Amedia claims God instructed him to start POTUS Shield just hours after Trump’s victory. The group believes that Trump’s election marks an opportunity for a spiritual revival which will make America a Christian nation. The group also prays for God to “sweep away” Supreme Court justices who don’t agree with them and might get in the way of their ultimate goal.

How very Christian of them.

Trump supporting “apostle” who believes Trump was anointed by God dines with Mike Pence and his wife.