Why Is the U.S. So Bad at Worker Retraining? 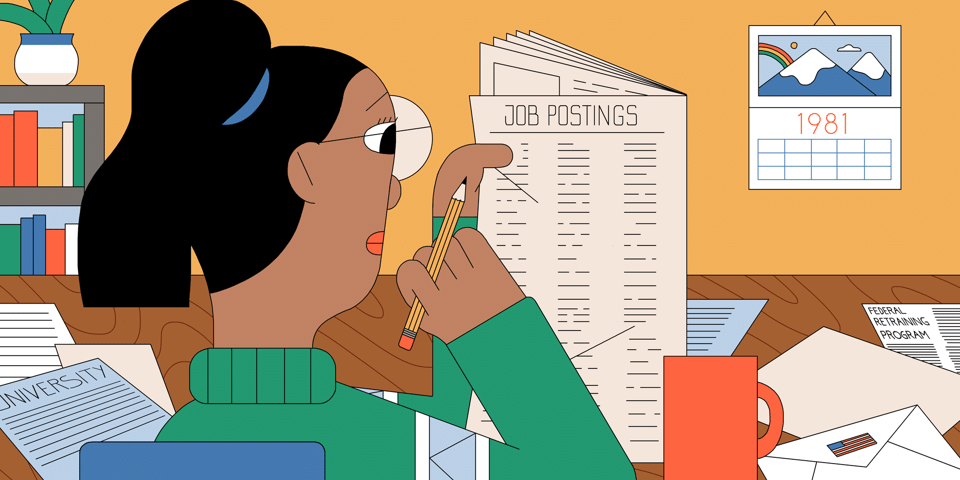 n a televised speech to the nation in February 1981, then-President Ronald Reagan warned that 7 million Americans were caught up “in the personal indignity and human tragedy of unemployment.” “If they stood in a line, allowing three feet for each person,” he explained, “the line would reach from the coast of Maine to California.” The unemployed were not only former assembly-line workers—they were secretaries, accountants, and cashiers, among other professions, too.

The 1980 recession had bludgeoned the labor market, and the 1981-82 recession was about to bludgeon it even more. Manufacturing plants across the country were shutting down or relocating. IBM was about to introduce the personal computer, rendering skills such as shorthand all but useless. A crack epidemic was ravaging cities. The unemployment rate, which had been hovering around 7 percent from 1980 to 1981, was rising; it would be close to 11 percent by 1982. The federal government’s main source of funding for job training was due to expire a year later.

From one vantage point, today’s workers seem to be facing a vastly different landscape: The U.S. has somewhat recovered from a historic recession, unemployment is low at 4 percent, and the manufacturing sector is growing again, albeit slowly. But many aspects of today’s climate echo that of the 1980s: The global economy is expanding, new technology is entering the workplace at every turn, and an opioid epidemic is ravaging communities. Automation will create new jobs, but analyses show that they’ll require digital skills that only the most educated and experienced people will have. Researchers today are predicting that white- and blue-collar workers will be in predicaments similar to their counterparts in the 1980s and ’90s, as soon as 2020, if they aren’t already there.

As a response to these challenges, many policymakers and business leaders turn to a federal policy solution that has stuck around since before Reagan’s day: job-training programs. These types of policies remain popular—at least in name, if not in investment—despite little evidence that they succeed on a large scale. In 2014, then-President Barack Obama signed the Workforce Innovation and Opportunity Act. And over the summer, Senator Robert Menendez and Representative Albio Sires, both New Jersey Democrats, introduced the Better Education and Skills Training for America’s Workforce Act.

Reagan’s version of this was the Job Training Partnership Act (JTPA) of 1982, which spent nearly $3 billion yearly between 1984 and 1998 and made some adjustments to the previous job-training formula by removing provisions for subsidized jobs in local and state governments and giving more control to the private sector. Although JTPA accounted for a relatively small share of the president’s response to unemployment, it was arguably Reagan’s most direct response to workers. And it worked about as poorly as any other program has.

Why Is the U.S. So Bad at Worker Retraining?

The strategies used to help workers displaced by technology and globalization in the 1980s ultimately failed. So why do the country’s policymakers continue to resort to the same tactics?