Trump aide: Some immigrants ‘too lazy’ to sign up for DACA 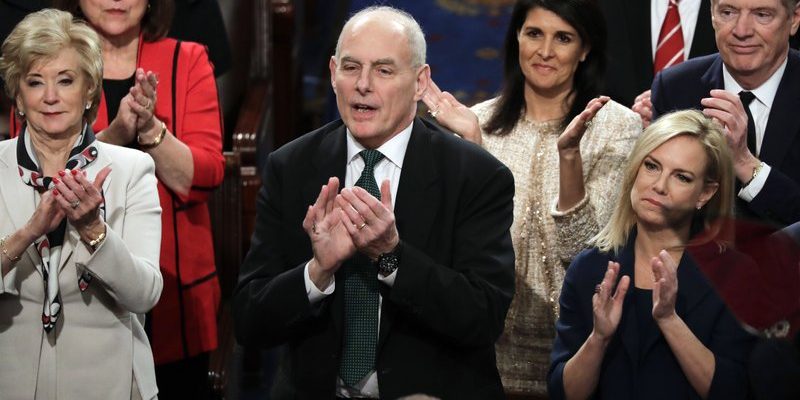 Some immigrants may have been “too afraid” or “too lazy” to sign up for the Obama-era program that offers protection from deportation, White House chief of staff John Kelly said Tuesday as he defended President Donald Trump’s proposal on the divisive issue.

Kelly discounted the possibility that Trump would announce a temporary extension of the Deferred Action for Childhood Arrivals program beyond March 5, when its protections could expire. He said the administration would not ask Congress to set a later date to give bargainers more time to reach a bipartisan deal, but said the government would not start deporting “Dreamers” who don’t have criminal records.

“They are not a priority for deportation,” he told reporters.

Kelly spoke as lawmakers have deadlocked in an effort to reach an immigration compromise. Barring an unlikely last-minute agreement, the Senate is expected to begin debating the issue next week, and it is unclear what if any plan will survive.

“We just don’t know where 60 votes are for any particular proposal,” said Senate Majority Leader Mitch McConnell, R-Ky., citing the votes needed for passage. Republicans have a slim majority and any measure will need around a dozen Democratic votes to succeed.

Kelly said Trump’s recent offer to provide a path to citizenship for up to 1.8 million immigrants went “beyond what anyone could have imagined.” A bipartisan offer by six senators that Trump rejected would have made citizenship possible for the 690,000 “Dreamers” registered under the program, nicknamed DACA, which shields immigrants who came to the U.S. as children and stayed here illegally.

“There are 690,000 official DACA registrants and the president sent over what amounts to be two and a half times that number, to 1.8 million,” Kelly said. “The difference between (690,000) and 1.8 million were the people that some would say were too afraid to sign up, others would say were too lazy to get off their asses, but they didn’t sign up.”

Trump aide: Some immigrants ‘too lazy’ to sign up for DACA

WASHINGTON (AP) — Some immigrants may have been “too afraid” or “too lazy” to sign up for the Obama-era program that offers protection from deportation, White House chief of staff