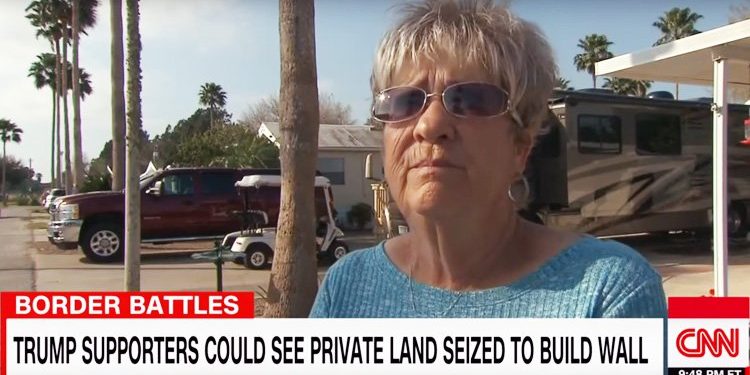 CNN spoke to border dwellers as part of a special report regarding the impact of Trump’s border wall between the USA and Mexico.

Pat Bell of River Bend, Texas, is facing the prospect of her home ending up on the Mexican side of the border if Trump’s wall is built.

As CNN reported, “Bell is a Trump supporter, but she does not support a wall, especially one that would essentially move her home to the Mexican side of it. She says ‘fences and walls don’t work’ which is exactly why she plans to fight for her property.’”

Bell told CNN that she would hire a lawyer and fight Trump’s wall if necessary. “Absolutely I would go to the people in charge and you hate to say ‘I would get a lawyer,’ but if it come to that issue and you have to I would,” she said.

D’Ann Loop of Brownsville, Texas, told CNN that 10 years ago their property was split with half of it ending up on the Mexican side of the border. After taking the matter to court, all of their land was determined to be in Mexico.

“It left us no property on the U.S. side of the border wall, including my house,” she told CNN, adding that: “Everything was behind — on the Mexican side of the U.S. border fence.” Her Ray added that they now must “enter the U.S. through a locked gate.”

Newsweek published an article late last year regarding a report that was released by the Democratic staff of the Senate Homeland Security and Governmental Affairs Committee.

The report claims Trump’s administration has not outlined how many U.S. citizen landowners will be affected by construction of the barrier, nor a timeline or costs for land seizure. “Despite the Administration’s request for an initial down payment of $1.6 billion to pay for 74 miles of wall construction and replacement fencing in Fiscal Year (FY) 2018, the Administration cannot provide the Committee with any definitive real estate costs or requirements, cannot tell the Committee how many American citizens will have their land seized, and has no timeline for completing land acquisition efforts necessary to build the wall that President Trump has ordered,” a release on the report stated.

Trump supporters in Texas discover that the joke is on them as they will end up living in Mexico if Trump’s wall is built.