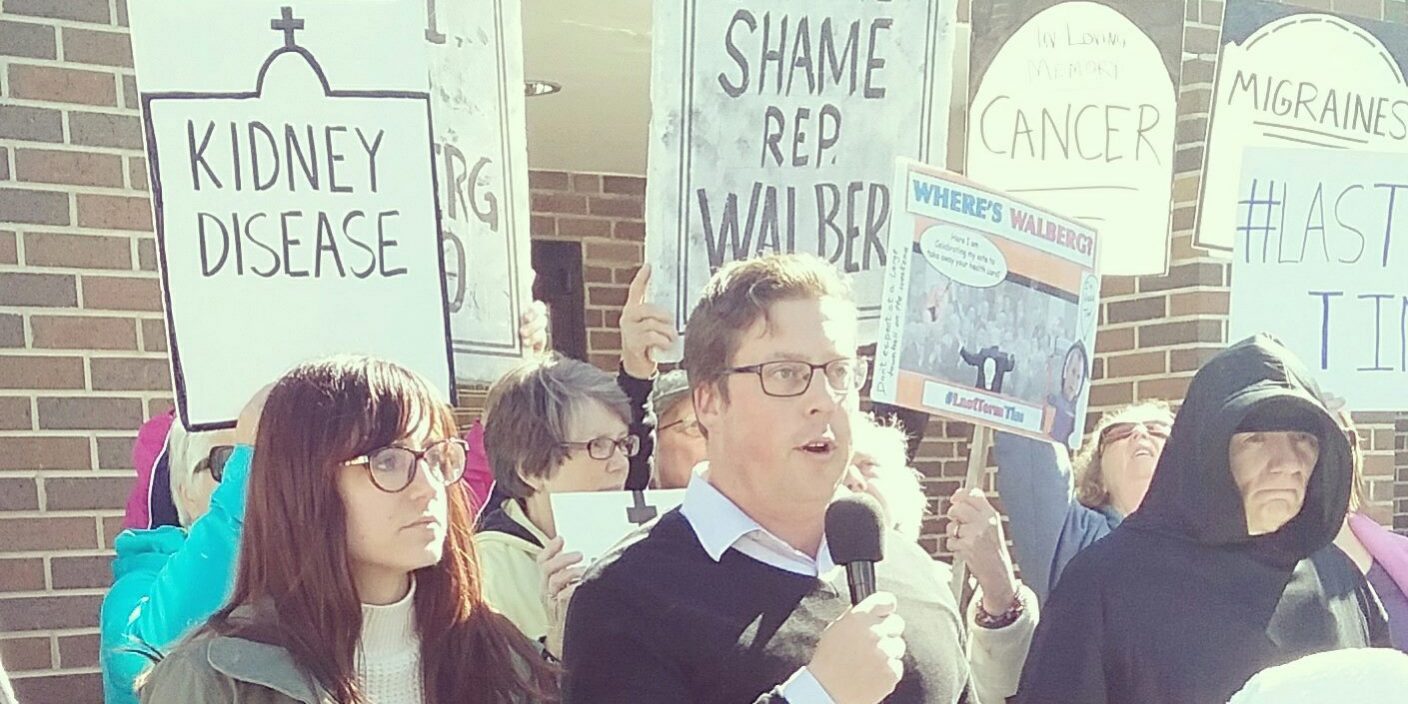 by Laurie Williams with Eli Rubin

Eli Rubin is a youngish (GenX-era) full-time professor of Modern European History at Western Michigan University. He and his wife (also a History professor) are raising 2 children (7 and 4; Eli also has three children from a previous marriage, 18, 16 and 12) . Though they live in Ann Arbor, Eli and his wife each have a long commute (1 hour 40 minutes, and 2 hours 40 minutes respectively) to their separate university jobs. Despite the obvious demands on his time, I’ve seen Eli around Ann Arbor at many events, and in nearby cities participating in events as well– most notably those connected to the issue of Single Payer Health Care.

Last year, my husband and I participated in four out-of-town events with Eli at the helm. The first was in Jackson, Michigan where he led marchers with a bullhorn in a mock-funeral at Tim Walberg’s office protesting the attempt to pass the “American” “Health” “Care” Act. The second was at Senator Stabenow’s Detroit office last summer protesting the AHCA and demanding action on single-payer. The third event was at the state Capitol building where Eli worked with other leaders from Michigan United and a state-wide coalition of groups to create the 300-people strong and highly inspiring Marching for Medicare for All. Finally, although indirectly related to health care reform, Eli led an action at Tim Walberg’s Jackson office protesting the Republican Tax Scam last December where he gave a very informative and inspiring speech to the crowd gathered there.

My impressions of Eli: he’s willing to go where he is needed, will do what needs to be done, and will lead and organize where organizing is called for. True to his life-roles as father and professor, I’ve also seen Eli with his kids at events where it was appropriate to have kids, and I’ve heard him speak (masterfully) where it was important to have someone explicate issues. I don’t know everything there is to know about Eli’s work as activist and volunteer organizer, but of the people of his generation I’ve so far met, I do know he’s one of the most dedicated.

LW: Could you please talk about the projects you are currently most committed to and heavily involved with?
ER: I’m mainly involved in Michigan For Single Payer Healthcare (michigan4singlepayer.org). I’ve been very involved in the set up, and was one of the founders of the group. Right now in Michigan For Single Payer Healthcare, I’m doing the heavy lifting administrative work of finding funding, getting the website up and running. I recognize the importance of getting structures in place, so that’s taking away from other things I’d like to be doing. I want to be working toward getting mass contact lists, programs, even paid volunteers, for M4SPH – like Michigan United has. Finding funding and raising money, canvassing and phone banking, visiting legislators, and holding or participating in community meetings (where we explain Single Payer and answer questions about it) are other aspects of organizing for Single Payer that we need community support with.

Michigan for Single Payer Healthcare started as an outgrowth of Michigan United, but now is split off from it. M4SPH still supports Michigan United (and vice versa), and works with them and with Michigan People’s Campaign on goals that overlap. I’m really excited that Michigan for Single Payer Healthcare is now a 501(c)(4) – because this non-profit status allows us to engage in unlimited lobbying and promotion of candidates, as related to our efforts to realize the goal of achieving single-payer health care in Michigan.

LW: What are your hopes for M4SPH? What is your greatest hope?
ER: That it will become an organization that politicians have to reckon with and seek endorsements from, and that it will mobilize voters to vote for politicians who support single payer.

LW: So what motivated you to begin work on Michigan for Single Payer Healthcare and make that your primary focus?
ER: It’s terrifying to see the health care system as it is. I’ve always been pretty healthy, and my family members are too – but this system is designed in such a way that it can and will – without remorse – bankrupt people, and ensure they don’t get the care they need. MLK said: “Of all the forms of inequality, injustice in healthcare is the most shocking.” I will work on this issue no matter what. I’ve had a lot of privilege, and I’ve been trying to fight back in any way I can – but this is the issue which most calls to me and one I can do most effectively.

LW: What are your hopes for the larger movement for progressive social change we see all around us in various forms?
ER: Everything was about “resist” initially. But we need to be more focused. We have to build something and not just fight against something. I’m committed to movement politics and focusing on issues like dismantling the structures that create and maintain inequality. We have to engage in issues-based activism, because if not, we’re just going to fail. We have to give people something to vote for. Centrists are not addressing the root causes of inequality. And the organizations doing the real work of making change often don’t get money from the centrists, who don’t want the current status quo challenged. People need to find the groups that are doing the real work of change and give their time and money to such groups. On the other side of this, organizers of groups that are working on changing the central issue of and root causes of inequality need to connect more effectively with people who are eager for the types of changes that eradicate inequality and poverty. Even if this connection only results in fund raising, that’s important; most people can donate $27 – and Bernie’s campaign proved that.

LW: You’ve been involved with Michigan United, and other groups through various actions. What, besides working as a leader with Michigan for Single Payer Health Care, are you committed to helping?
ER: I’m on the Board of a new organization, Permanent Progressive Campaign, which is a 501(c)(4) designed to support progressive groups and candidates. It will be a place for progressives to turn to get money, information, support. I also hope to go to Poor People’s Campaign events in the future. I’m interested in supporting the Poor People’s Campaign because I think they’re doing really worthwhile things, and that it’s an important movement. I was raised in a world of relative privilege, and have had a lot advantages that others haven’t. I feel a responsibility to help those who didn’t receive those kinds of advantages.

LW: Looking back into your personal history, Eli, what, in addition to compassion, supplied a significant motivation to act on your idealism?
ER: Well, I’ve always been pretty profoundly upset by unfair situations, and I guess I really hate the structures that are built into our society that create widespread and systemic inequities and unfairness. I’ve always loved this Karl Marx quote: “Until now, philosophers have tried to just interpret the world; the point however, is to change it.” I also feel my activism is a duty. If people don’t act, then it doesn’t get done.

LW: Love that! And I can identify, and I’m sure many others can. So what are, or have been, the biggest roadblocks on the way to doing the work that creates change – for either yourself, or for groups in general?
ER: People are busy. They have jobs and lives. It’s difficult to get people to commit to doing things. What I’ve seen is that most of us who are really active often meet other activists at meetings, but they’re often committed to other things, and not necessarily able to help. A lot of people agree with progressive ideas, but neoliberalism has made sure they’re alone with their desires.

LW: Going back to philosophies, what underpins your philosophy of organizing and activism?
ER: I think you have to a balance between the theoretical, or political philosophy, and action. Marx said the goal of philosophy is to create action. Many activists are out in the street, rushing from one thing to another, and they might not understand what they’re doing or why they’re doing it. They may not be thinking about the big picture, theories or philosophies. On the other hand, I also know other scholars who are deep into the theory, but can’t be bothered to come out to canvas.

LW: How do you find a balance between “idealistic” and “pragmatic” in your work? Those poles sometimes seem to divide us in our political philosophy as groups, and sometimes even within ourselves…..
ER: An organizer once said “No permanent friends, no permanent enemies.” We must be united. That’s how I practice pragmatism. When activists share information about our lives and really listen to each other, I find that after learning about one another, the idealism and the pragmatism melts away and we realize we are on the same side.

LW: How do you feel your professional role as a teacher/professor impacts the next generation?
ER: Teaching is all about fostering learning, and knowledge – and learning and knowledge are invaluable. The ability to think critically and analyze almost always works toward social justice in the end. Teaching is also about relationships, about working with people. Just the very act of teaching or working with people to open up their worlds conveys to others the idea – a legacy, if you will – that you don’t need to be consuming, or busy buying something for your life to have meaning. Monetizing things (LW: like educational tools – which we were talking about in a side thread) is not a way to change things for the benefit of people, although it will lead to someone’s profit. Things don’t necessarily get better with more money involved. Health care is one of those things that doesn’t improve with more money added. Teaching is another.

LW: Eli, we’ve all encountered rough patches in this work – times when we’ve wanted to scream or throw our hands up in resignation. What helps you when times are rough?
ER: Encouraging words from other people. We don’t do it enough, but it makes a huge difference.

LW: How do you manage with 2 children (one under the age of 5) at home, and a commute of 1 hour 40 minutes one way? How do you manage when your wife’s commute is almost double that?
ER: Well, I do have a flexible teaching schedule. I tell myself I can do what I can do. And I keep plugging away at things and build on them. I’ve found you also have to be patient and not skip steps, otherwise, you may have to redo some things. I think you can usually find at least an hour each day to devote to activism, and I’d like to think that most people are working that into their lives. It seems that many people want to. But then they run into the question “What should I do?” That’s where organizers come in.

LW: As an organizer and activist, what do you believe to be the three most critical things needing our focus?
ER: 1) more community engagement

2) become and stay more engaged and don’t worry about people showing up. Not everything has to be a home run

3) have faith that your efforts will lead to something someday. It’s the sum total of everything we do that will lead to change.

LW: What is your greatest hope for other activists with regard to this work we’re doing?
ER: That we create lasting structures and relationships that will eventually be more powerful than corporations.

Lecture for Sustainability: A virtual conversation with Naomi Klein