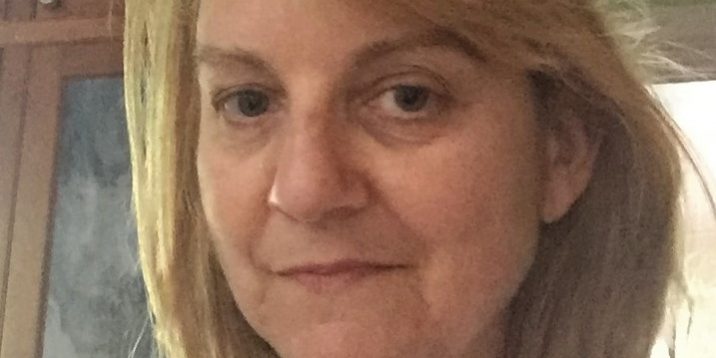 by Laurie Williams with Margaret Schankler

I had known about and been impressed by Margaret’s work as Facebook Admin for Michigan Resistance for several months before I actually met her while she was captaining the Michigan Resistance table at the regional Indivisible Fair in Farmington Hills, Michigan in May 2017.   Although Margaret is physically petite and flashes a smile befitting a pixie, when you see her lead a group of Michigan Resistance callers, you know she is a force to be reckoned with.

LW: Margaret, how did you come to captain the citizen side of Michigan Resistance?

MS: When I began as a volunteer, we were all just trying to figure out how to do this. As the process for organizing and  running parties came together, roles evolved for each of us. At each calling party we cajole volunteers to think about leading. We train them as support leaders and within a couple weeks, they are leading parties themselves. Terryl Sperlich and I do a lot of the basic work to keep things moving, but no one is really at the helm of the group.

MS: The Michigan Resistance exists primarily to bring the voices of regular citizens to the attention of our state legislators. We address national legislation and issues as well, but the primary focus is the state of Michigan

MS: It was formed during the lame duck session in late November of 2016, in the aftermath of the election. Solomon Rajput and Callie Bruley, the two top organizers for the Hillary campaign in Washtenaw County hatched the idea. These politically savvy 20-somethings knew that a lot of bad bills would be brought up in the last month of the legislative session by Michigan MOCs who were soon to be  term limited out. Callie and Solomon wanted to do something about it. They had relationships with our two state reps at the time – Jeff Irwin and Adam Zemke. The idea was to have the reps tell us what bills were being debated and which legislators we might influence. The Democratic party gave us a statewide list of Hillary campaign volunteers. We gathered local volunteers and had them place calls to other former Hillary volunteers, asking them to call the targeted legislators. We were able to influence the defeat of 11 bills, just in that lame duck session. After that, we just kept moving forward.

Side note as to how I became involved. One day in late November 2016, I was sitting in Cafe Royale on Main St in Ann Arbor, deeply depressed and teary over the election. In walk Solomon and Callie, who I knew from volunteering for the campaign. They were beaming and excited about this new idea they had just hatched. They were about to have a call with Adam Zemke to form the first actions. I asked them if I could participate, and I never looked back!

LW:   None of us come to our activism without a reason or motivation.   What significant experiences motivated you to become involved with the Women’s March, women’s issues, the Democratic Party in Michigan, and Michigan Resistance?

MS: Like many people, I think the deep psychic wound of the election made it impossible for me to do nothing. Instantly, there became so much more to challenge than we ever dreamed of. Before 2016, I was intellectually aware of the misogyny, racism, corruption, and other ugliness in our society. But I had never felt it on such a visceral level. I’m ashamed I didn’t understand the depth of these problems before the election. Every day since, it shocks the imagination to really understand what kind of nation we are.

LW:   What is the one essential belief or underlying value that you cherish that keeps you going when times get tough?  Can you explain how that belief or value helps you chart your course as an activist?

MS: I believe that every effort is worth it, no matter how small or how seemingly ineffective. Being silent or ignoring what is going on is not an option. Almost every day, I get down, and have to have a conversation with myself that goes something like: “Just keep putting one foot in front of the other. Focus on the work. Everything you do matters.”

LW:   I like that you tell yourself “everything matters.”  Believing that not this or that might not matter can be an impediment to taking action.  What are the biggest obstacles you think we face in our efforts to create positive system-wide change?

MS: I believe money in politics is at the source of a lot our problems. Unfortunately, the right wing keeps finding ways to allow more and more money to flow to them. Since Citizens United, it’s gotten much worse. We’ll need a majority on the Court, and in the House and Senate to do anything about it.

LW: What do you consider the three most important things needing to be done right now?

MS: I don’t think any big sweeping changes can be made until we have a majority in Congress. That is the number one thing that has to happen. After that, we need to ratchet up pressure on our democratic leaders to take on income inequality and criminal justice reform, and healthcare reform at a level that we have not seen since the 1960’s.

LW: Do you consider your activism a job?  A hobby? A life calling? If you were called upon to advise a younger person on how best to embrace activism in their life, what would you say?

MS: I consider it something I have to do to stay sane. I think young people don’t need people my age advising them. They know what to do intuitively and are still idealistic and un-jaded. My only suggestion would be, give it all you’ve got!!  I would love to hear how others are effectively energizing complacent youth. I don’t know how to do ths.

LW: What unique skills and background experiences help you in your role as activist?

MS: Probably the most useful thing is having been around for 60 years. I’ve seen a lot and am able to cut through the b.s. to clearly discern what an issue is really about. I don’t worry about credit or who’s telling me what to do, or what title somebody gives me, like my younger self might have done. I just focus on the work. Age brings you a lot of good things!

LW: What are your most heart-felt hopes for Michigan Resistance? What are the biggest disappointments you’ve faced while running the citizen end of it?

MS: I wish it to grow statewide, and to keep making a difference. Losing a vote on a piece of legislation is never easy and sometimes it’s crushing.

LW:   Who are the people or groups who have most impacted you as you’ve worked as an activist?

MS: Recently, I’ve become in involved with the Black Caucus of the Washtenaw County Democratic party. The chair is Robin Stephens, and I have much respect for her. She led some workshops called “Uncomfortable Conversations About Race” that were real and unvarnished. I admire her a lot, and learned a lot from those workshops.

LW: What do you do for re-creation, and how important is R&R for activists?

MS: I just keep moving. When my brain can’t handle the multitude of injustices occurring on any given day, it checks itself out. After a pause, I get back on track. Breaks are necessary, but the thing that really makes me feel better is taking action.

LW: What are one or two –  maybe even three! – things you believe everyone is capable of doing to help bring about positive change?

MS: Showing up. Everyone is capable of showing up to something. Keep showing up & you will make a difference.