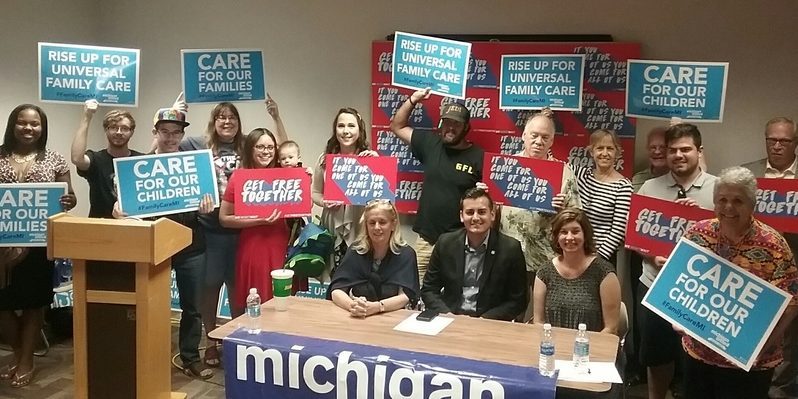 by Laurie Williams with Laura DePalma

Laura DePalma is well-known among activists around Washtenaw County for her work with Michigan United in organizing for Universal Family Care, fighting against the destruction of the Affordable Care Act and the promotion of the American “Health” “Care” Act in 2017, as well as her work promoting Single Payer, Earned Paid Sick Leave, and training others in canvassing and deep-canvassing. Laura is a both a teacher and a social worker by training, and that training is immediately obvious due to her warmth and engagement — whether with individuals or groups. She is a great conversationalist, an engaging teacher, a supportive friend (who in her personal life helps friends get elected in her “spare time”), a very hard-worker and dedicated activist, and a genuinely kind and loving person. Thoughtful, intelligent, self-aware, engaged, committed, and concerned — Laura is the kind of activist we might all aspire to become!

Laura DePalma works for Michigan United as an organizer and program developer. She led Michigan United’s campaign for Universal Family Care in Michigan and helped bring that campaign to it’s first fruitful political manifestation in Michigan House Bill 4647, “The Long-Term Care Study Bill.”  The bill received widespread bipartisan support, was co-sponsored by 40 members of the House, and was included in the State Budget. It was then able to receive funding and move forward with required research and analysis. Introduced by Rep. Hoadley (D-Kalamazoo) in 2017, the study will complete a rigorous needs assessment of long-term care in Michigan and run an actuarial analysis of potential solutions. Michigan United founded the Michigan Steering Committee for Michigan Coalition for the Long-Term Care Study Bill Commission and has been leading a grassroots lobbying strategy around the study for the past several months. Over a dozen Michigan organizations signed on in support of a letter the coalition sent to members of the Appropriations Committee in May. Please contact Laura De Palma at laura@miunited.org if you want to get involved in the campaign’s next steps.

LW: What do you consider your first activist experience, Laura? And why was it important in the development of who you are today?

LDP: One of my first activist experiences was going to DC on a bus in 2003. I went to protest the Iraq war as part of the anti-Iraq war movement, and I felt so empowered by that. It inspired me to look for other things to do. From being steeped in the anti-war movement, I connected war and US imperialism and hegemony (which was about extracting other countries’ wealth and resources and conquering different communities of color to maintain our power) to the related issue here at home of conquering members of different communities within our country by imprisoning them. I made connections between war and the prison-industrial complex, and I facilitated theater workshops in prisons as an undergrad as a way to protest that.

LW: The theater workshops sound fascinating. Could you tell me more about them?

LDP: Yes. I did those workshops from 2003–2005, and I’m still an associate member of the group. It was variously known as “Theater of the Oppressed,” and “Liberation Theater” (originating with Augusto Boal, founder of Theater of the Oppressed, and Paolo Freire who wrote Pedagogy of the Oppressed). Doing this work was one of the things that led me into social work. I made the decision that working as an MSW would put me in one of the most important places to be connected with people who shared my worldview. I came to identify as a community collaborator and a community organizer during this period. I worked on my MSW ten years after finishing my undergraduate degree.

LW: Tell me about your teaching experiences.

LDP: I was one of the first teachers on staff at a newly opened charter school in California that was a student-run progressive media arts school. I was interviewed by students before being hired. We gardened together as a community, and I did home visits. I taught there for four years, and it was wonderful! After four years, I was ready for a change and wanted to move to San Francisco to teach in 2009. Then, I joined the Obama campaign in Columbus, Ohio in 2012 as a Field Organizer, and worked in that position for 6 months. That experience taught me that I wanted to do something between electoral and community campaigns. As an MSW, I had been doing only community-based work, and I found I needed a balance between electoral and community work. After that campaign, I completed my MSW. Then, I stumbled into Michigan United — and it ended up offering me the perfect blend of electoral and community work.

LDP: When I applied, I had acquaintanceships with half the people in the room! And I felt, even during the interview, that this was “home!” Now, the work I do is very focused on community building and working with people to achieve shared political goals.

LW: Can you elaborate?

LDP: I am the organizer on our Universal Family Care Campaign, which is about making universal family care possible from child-care to elder care. Our Universal Care Campaign includes issues like universal long-term/in-home care, paid family medical leave, a living wage and protections for care workers, compensation and support for family caregivers, universal child care, and protection for our safety net programs (SNAP) and Medicaid/Medicare.   I was on the planning campaign and am currently the campaign director – crafting strategy and long-term goals to win bold legislation around family care in Michigan. I started as an organizer in Washtenaw County and Downriver. I came to Washtenaw County to help people explore and advocate for the myriad of issues related to family care. I worked with the Interfaith Council for Peace and Justice, with Michigan’s 52nd District State Representative Donna Lasinski, Rep. Adam Zemke, Rep. Yousef Rahbi, and others. Michigan United is defense-focused on Health Care issues, but pro-actively so, as we support Single Payer, Medicare for All, and Improved Medicare for All. I helped others working to defend the ACA, Medicare, and Medicaid while working in Washtenaw County.

LW: Do you consider your activism a job, a hobby, or a life calling?

LDP: For me, it’s a life calling. I wouldn’t feel okay if I weren’t doing this work; it’s very healing and energizing.

LW: Laura, without giving your age away entirely, you’re young enough to be my child (because I’m a Generation Joneser) if I had started a family early, and you’re just barely old enough to have a teenager, if you started really young. How do you feel about activists in these different age categories? Are there different problems you encounter with each age category? If so, what can be done about these problems, so that we can work together in more effective ways?

LDP: I experience a lot of intergenerational involvement in my work, and I love it! But that’s a good question. I am not sure. I will get back with you!

LW: What things do you find disappointing as you work to create change?

LDP: I find it concerning and disappointing that we have lacked a unified focus or unified movement, but I think that has been changing and I think that we have been growing a stronger, grassroots intersectional movement that will seriously challenge neoliberalism. I feel that we’ve been fragmented and disconnected and have lacked a strong movement with clear and unifying political goals. I think small pockets of strong, local, issue-based groups are important but they also have to come together and connect. Valuing each other and the different aspects of the work is what makes this work. Michigan United trains people to organize around what their deepest self-interest is, but we also train people to stay connected. We encourage people to take on issues that they want to work on, and we will support them.  When people work on issues that they are deeply drawn to, they tend to remain more connected with those they train for organizing, with Michigan United, and with the community we are all working on growing.

LW: What is your greatest hope for the movement or movements for positive, progressive social change that are developing now?

LDP: My greatest hope it that people never lose hope. I hope that people won’t lose sight of the fact that we’re in this for the long haul. I fear that with all the outrage at this particular moment, activists will check out when things get better….

LW: What do you do for re-creation, and how would you suggest others turn from action and resistance to rest and recreation?

LDP: We all have to practice self-care. We don’t have to be in it 24/7. I think we can all check out for self-care reasons, but don’t check out altogether.

LDP: Emergent Strategy: Shaping Change, Changing Worlds by Adrienne Maree Brown; The Mother of All Questions by Rebecca Solnit; and Playbook for Progressives: 16 Qualities of the Successful Organizer by Eric Mann. They’re all great books!

LW: You are an experienced and successful organizer, and I value your opinion. I’m sure many others do, as well. So, I’m going to ask you what you consider the three most critical things needing to be done now.

LDP: 1. Abolish ICE; 2. Abolish the prison-industrial complex; and 3. Create a nation-wide committee of the most impacted people, to rebuild our world. Finally, I’d say that we need to stay connected. I think it was Adrienne Brown who talked about “Critical connections over critical mass” in Emergent Strategy. I don’t think we can put one above the other. We need both. We need critical connections and critical mass.