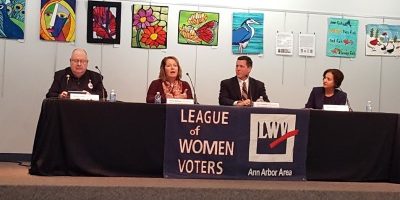 “Never burn your bridges” is the paramount lesson Susan Prakken Smith has brought away from a lifetime of service to the nonpartisan League of Women Voters whose roots extend to the first Suffragist movement. Former president of the State League and current president of Ann Arbor’s growing League chapter, she serves as redistricting director on the State League Board and Chair of the National League’s Nominating Committee, which chooses the National slate of officers and directors for the next two years.

Joining the League as a young stay-at-home mother in the early seventies, Smith learned skills which were crucial to her when later, she served as president of Mount Pleasant’s School Board and, subsequently, its mayor. She came to these positions knowing how to conduct a meeting with very unhappy people and to respect all parties in a conflict. In subsequent years, as the president of the State League, she had the opportunity to testify before the legislature on voting rights and redistricting.

Once she retired from her professorship in business administration at Central Michigan University, Smith moved back to her hometown of Ann Arbor, now able to devote her full energy to the League.  As the current president of this nonpartisan organization, she leads its advocacy on Proposals 2 and 3, which will be on the ballot this November 6. (Proposal 2 would amend the Michigan Constitution by establishing a citizens commission which will redraw district boundaries for the Michigan State Legislature as well as the U.S Congress every ten years; Proposal 3  would add a set of voting rights, such as no-reason absentee voting, to the Michigan Constitution).

Redistricting is Susan Prakken Smith’s primary focus. In addition to supporting Michigan’s Proposal 2 and 3,  the League, in conjunction with some Democrats, filed suit in Federal Court, arguing that Michigan’s voting districts are unfairly gerrymandered under the U.S. Constitution. In acting to protect voting rights, Smith believes that the lawsuit carries out the League’s “mission of defending democracy.”  As she explains, gerrymandering is responsible for Michigan’s election of 9 Republicans and 5 Democrats to the US House of Representatives, despite the fact that the total Congressional vote in Michigan was split evenly between Republicans and Democrats.

The League of Women Voters, which now admits men, and Susan Prakken Smith have both seen much change in their time. Smith spent the majority of her childhood in a one-acre home on Wagner Road, which is the site of the current Washtenaw Intermediate School District. In 1961, after she’d completed a year of a two-year MBA at the University of Michigan, the dean told her that all she could hope for was a job as an executive secretary—that is, if she learned to type. Both Smith and her beloved League have come a long way, baby.