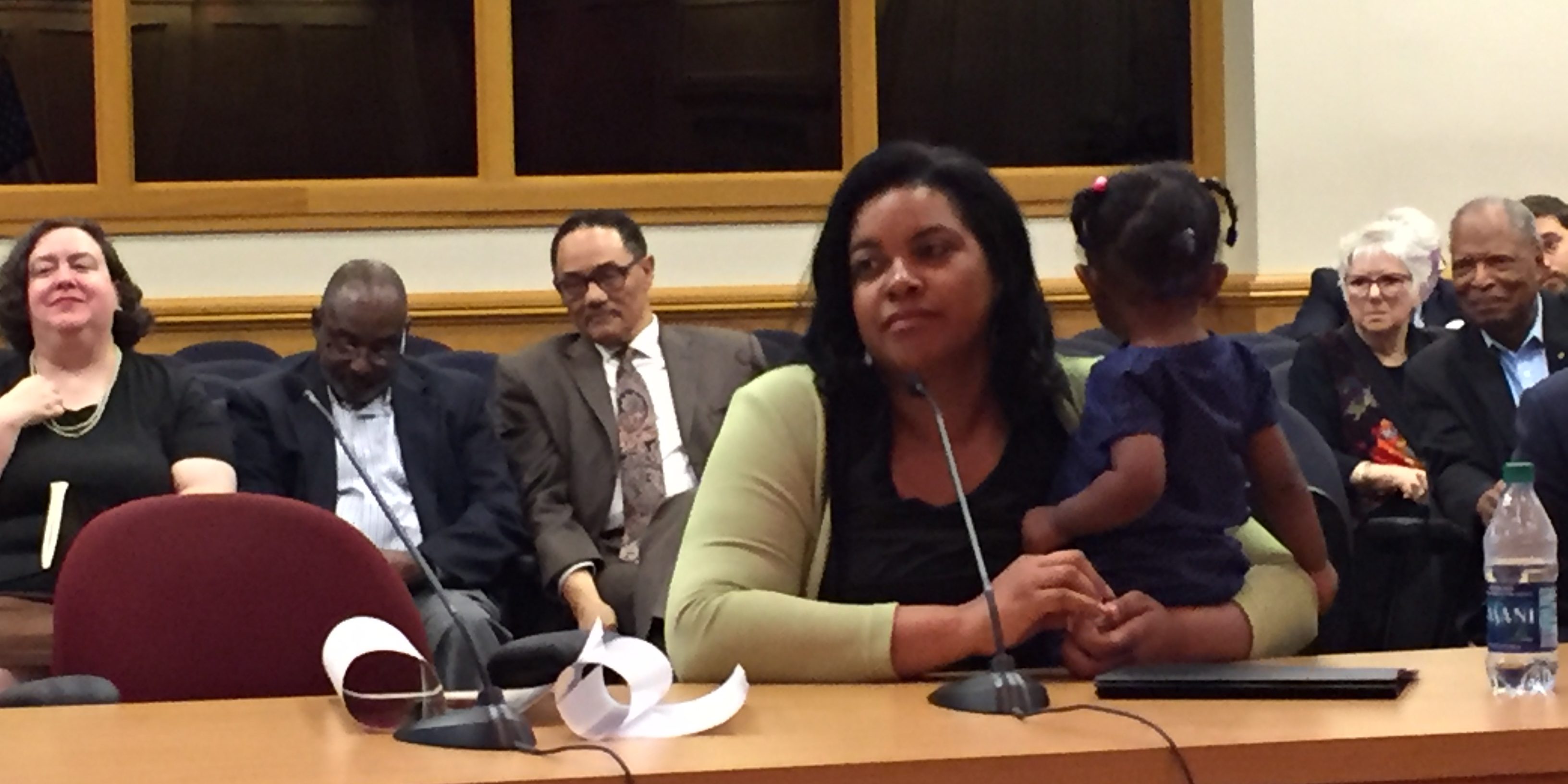 By Laurie Williams with Leslie McGraw

Leslie McGraw is a writer, activist, and owner of a business specializing in social media marketing training.  Highly organized, articulate, and dedicated to her clients and commitments, Leslie is warm, funny, thoughtful, and insightful.   With a degree in Business Management with a minor in communications, Leslie has worked in higher education as an administrative assistant, as a journalist, and in content marketing and event coordination.  Although she has many post-baccalaureate credits and certificates, she’d like to someday do a masters degree that combines her interest in communications, computer technology, and social justice.

As busy as she is, Leslie was off to help a friend who is running for a position on a local school board when we concluded our interview.  She’s yet another Gen-X-er activist I know who is adept at managing a family and a multitude of projects with grace and ease. Although she claims not to be “much of an activist,” this assertion is one based more in humility than in actual reality.  Leslie is an activist, and comes from a family of activists – one of whom was the first NAACP voter rights activist to be murdered in a heinous lynching in 1940 for his efforts to secure voting rights in these United States

As we talked, I realize how Leslie might feel that it’s hard to believe she is having an impact as an activist.  There are many reasons for wondering if our activist work is leading anywhere, but for black women, there are more.  I suggested that in light of a recent EPI study showing that black women still earn 33% less than white males, it’s easy to understand how black women activists feel at a loss to describe and measure their activism and progress in creating change.  At such an economic disadvantage, most black women are struggling simply to afford life’s basic necessities – never mind finding time to do activist work. Leslie agreed, and responded, “Lack of family resources and lack of wealth accumulation is a way of life in the black community more often than not, but when all the experiences you feel most passionate about are not addressed by either party, or society at large, it’s hard to figure out where a black woman fits in inside that space….In activism, we’re all at different stages, but it’s really evident in the black community.” While continuing to discuss black women as activists, and how black men _seem_ to have had a more important role in the fight for civil rights and against economic and racial injustice, Leslie noted that it’s harder for black women to speak out or even express the anger that they might justifiably feel about a specific or general injustice.  She sighed and said: “And the consequences of black women showing anger can be really heavy,” We both fell silent, reviewing examples in our minds, and then almost simultaneously uttered: “Angela Davis!”

When I commented that I was not sure I would be able to restrain my anger if I’d been born black in this country, Leslie said, “Everyday microaggressions come from the system, not necessarily the person.  People with microaggressions come from a place where they are uninformed. I try not to let anger get the better of me. I love people. Not the system that creates this craziness; but I love people.” I’ve been working alongside Leslie as an activist and writer only a short time, but long enough to know that she does, indeed, truly love and accept people – even people who act in ways that cause hurt and pain.  Perhaps this ability to accept what many would find unacceptable comes from what she credits as having been able to grow up with strong and empowering black women as role models on her maternal side, and a large, extended, loving family, with a history of involvement in the black Christian community.

When talking about her great uncle’s murder, Leslie has said at least a couple of times, “it’s not about race.”  We both believe that beneath the “excuse” of race, are issues of income inequality and class division that control and magnify the expression of the racism, and that racism is an excuse that can be used to keep the people with the power, in power.* Indeed, income inequality and class division may have been almost as much of a factor as race in the lynching of her great uncle. Her great uncle was young, and relatively well-off in a community that was 80% black and controlled by white businessmen and white law enforcement. He was a well-spoken charter member and up-and-coming leader of the newly founded local NAACP, and worked to secure voting rights for blacks. He may also have been perceived to be more well-to-do than many of the white people in Brownsville, Tennessee.  Evidence shows that the sheriff (who was later re-elected three times), a business executive at the nearby Coca-Cola bottling company, and a leader of the Chamber of Commerce were among the 150 white people who came to kill 31-year-old Elbert Williams on the night of June 20, 1940. Led and sanctioned by local law enforcement and business leaders, the horrifying act of domestic terrorism had an impact that reverberated on the local community (and in Leslie’s family) for decades.

Leslie has written about the brutal lynching of her great uncle on her website, and is currently working on a book about it. Describing it as “part memoir, part historical non-fiction about my late uncle, Elbert Williams,” Leslie writes:   “Elbert Williams was a civil rights voting rights activist who was murdered in the midst of a 1940 domestic terror campaign as he attempted to organize and register black people to vote in the rural, segregated town of Brownsville, Tennessee.”

In 2015 she was contacted by cold case attorney Jim Emison and asked to be a representative for the family while he sought justice for Elbert Williams using newly obtained evidence from the FBI.  This evidence included fieldwork conducted by the late Supreme Court Justice Thurgood Marshall. Leslie told me that the case reportedly haunted Justice Marshall to his dying day. As a family representative, Leslie is the DNA donor for the case.

Since 2016, Leslie has steeped herself in the cold case research, family genealogy research, and activities related to the search for justice for her great uncle.  She testified at the 75th anniversary of his death, and has met with members of the community seeking justice and healing (including members of families who were involved in the lynching, many of whom she is now Facebook friends with), Tennessee legislators, historians, and members of the local and national press.  Her testimony to the Tennessee Legislature’s Unsolved Civil Rights Crimes Special Committee in 2017 can be viewed with the following link (to hear Leslie, scroll to the 1 hour 17 minute point into the video).  Leslie’s dignified, thoughtful, and articulate testimony was filled with gently-delivered but pointedly powerful truths that needed airing, and her finale brought me to tears.  And by “brought me to tears,” I do not mean “brought tears to my eyes;” I mean anguished sobbing. I called Leslie immediately after viewing the testimony to tell her how much her testimony meant to me – and to the world – and I could barely make myself understood as I was so overcome with emotion.  After Leslie testified in 2017, the Tennessee Legislature, both Democrats and Republicans together, approved the re-opening of Elbert Williams murder investigation. She met with an attorney from the state at the time, and he signed a letter to reopen the case. However, after Trump put a hold on civil rights cases, forward movement on the case was stopped for a year. Trump basically said funding was to go to either civil rights or human trafficking; but not both.  “That just tore my heart out,” Leslie said. “One of the organizations close to my heart is Sanctum House, a respite for survivors of human trafficking. I started working with them in 2013 on fundraising and social media issues. It’s a _very_ worthy cause, and to deny money to either civil rights cases or human trafficking cases is unconscionable.”

Leslie McGraw is an amazing storyteller, and wove many historically significant details about her great uncle into the story she shared with me, and my husband, in early August.  On August 8, a few days after Leslie first shared her family’s story over our dinner table, I was pleasantly shocked to read the news that the investigation into the murder of Elbert Williams was ordered to be re-opened.  You can listen to and read one of the many interviews Leslie gave (this one to NPR) here.  Because Leslie is working on a book about his life and death (which occurred only one lifetime ago), I will withhold the details shared, and urge you, gentle reader, to look for information about Elbert Williams, early voter rights activist, and to read Leslie McGraw’s forthcoming book.

When we last spoke about the good news of August 8, Leslie told me:  “I would love for my great uncle to be known for his role in history and voter rights.  Nobody should be learning about this for the first time at age 50 or 60.  If you’ve made it to 50 or 60 and don’t know about this part of American history, you’ve been living a sort of lie.  As much as it means for my family to see this case re-opened, the issue is lost if I only look at it from my family’s perspective.  He was, as far as I know, the first voting rights martyr in the U.S.”

*NOTE:  At her urging, Leslie and I will be reading and discussing Hitler’s American Model:  The United States and the Making of Nazi Race Law by James Q. Whitman, 2017, Princeton University Press.  Although I’m only a short way in, I’m finding it a very informative read. Any reader who wants to join us in a discussion of this book can contact us here at PEG online.