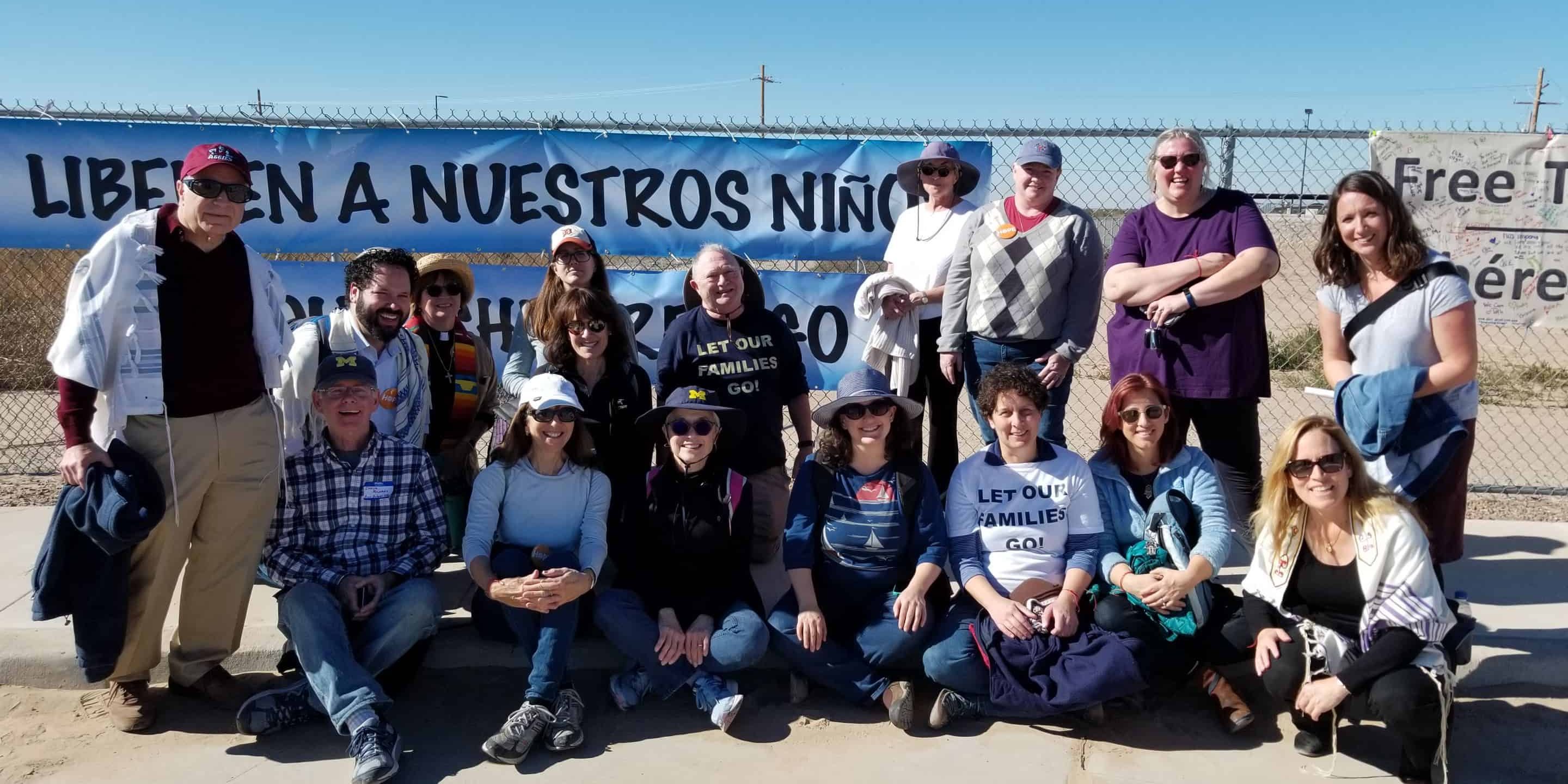 by Bette Cotzin, PEG Activist
Inspired by Rabbi Josh Whinston (Temple Beth Emeth, Ann Arbor), a community of faith leaders and activists from across the country gathered in Tornillo, TX, last week. This multi-faith pilgrimage entitled, “Let Our Families Go,” was organized to bring attention to family separation and, particularly, the 1600-2000 unaccompanied minors being held in a detention camp in the desert while seeking asylum. Following in the footsteps of asylum seekers, the participants first crossed the Port of Entry bridge in El Paso, then drove to witness the teen detention camp in Tornillo. Though on Federal land, the camp has no transparency. Even the Homeland Security bus has blocked-out windows. At the vigil/rally, there were 120 concerned citizens from all over The participants sang and learned and cried together. The young people were inspirational. At the conclusion of the vigil, participants proceeded to a shelter to assist immigrant arrivals, doing all sorts of “jobs,” e.g., laundry, sorting clothing donations, serving a meal, playing with the children.
We have a broken immigration system. We are separating families. We are holding unaccompanied minors in a tent camp in the Texas desert. We are denying asylum to close to 100% of those seeking asylum, particularly because our previous Attorney General, with questionable legality, changed the rules such that the desperate need to escape domestic and gang violence in their home countries no longer qualifies as a reason for asylum.
Seeking asylum is a legal activity under our Federal laws. We are treating those seeking asylum as though they are committing a crime. Separating families and detaining unaccompanied minors for weeks or months is immoral. The immigrants who we met at the shelter – men and women, mothers and fathers, children and teenagers – are seeking the American dream of living in safety and freedom in a land of promise. Our nation needs to fix its immigration system!
For in-depth coverage of this journey, follow Tracy Samilton, a journalist from Michigan Radio who was embedded in the pilgrimage – 4 consecutive articles:
1) Caravan leaves A2
2) Caravan travels 1700 miles
3) Caravan arrives at El Pao detention center
4) Protestors head home.
There was also press coverage in publications such as Newsweek, Religion News, Chicago Tribune,Huff Post.
Categories: In The Spotlight, Newsletter HighlightsNovember 21, 2018Leave a comment
Tags: activismPEG