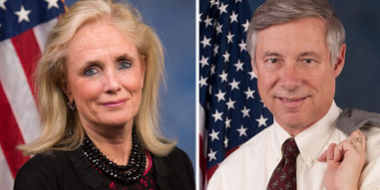 Rep Debbie Dingell, a Democrat (12th District), and Rep Fred Upton (6th District), a Republican, discussed the importance of bipartisanship at a forum on February 18, 2019, at the UM Gerald R Ford School of Public Policy. The two representatives are part of the Problem Solvers caucus–a group that works to create bipartisan cooperation on important policy issues.
As Dingell said, “The common ground is Michigan. We love this state. We want to do what’s right for it. So the Great Lakes, the auto industry, PFAS, so many issues that really matter to people in this state.” In fact, in January the two co-sponsored legislation that 1)designates all PFAS chemicals as hazardous substances and allows the Environmental Protection Agency (EPA) to clean up contaminated sites in Michigan and across the country, and 2) that champions the STEM education program FIRST Robotics . Dingell and Upton are old friends, and their friendly banter at times drew laughter. When Upton, for example, noted that Trump’s tax bill could have been better and he wished it had had some Democratic votes, Dingell quipped “Then you should have written a better bill.” Watch the video of the forum. – Michigan Radio
Categories: In The Spotlight, Newsletter HighlightsFebruary 22, 2019Leave a comment