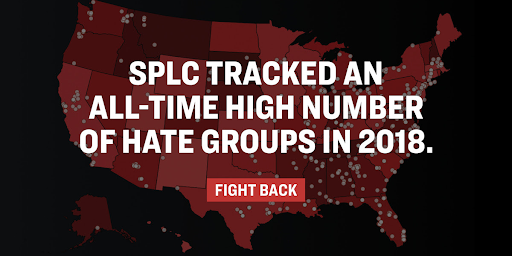 This growth comes after three straight years of decline during the Obama administration. Hate crimes have followed the same escalating pattern, as Trump has given violent racists a license to act on their bigotry. The Southern Poverty Law Center (SPLC)  just released its annual count of hate groups.
Trump spread fear about the country’s growing diversity, and he wasn’t alone. Fox News served as both his megaphone and a source for his incendiary claims during 2018. Aided by a chorus of supporters in right-wing media outlets and the advisers in his administration with hate group sympathies, Trump enacted a raft of policies straight out of the radical-right playbook.
You can read their new report and see their latest interactive hate map showing the names, types, and locations of the 1,020 hate groups operating across America.
Category: Newsletter HighlightsFebruary 28, 2019Leave a comment
Tags: AgainstHategovernmentpeoplepoliticsSPLCTrump