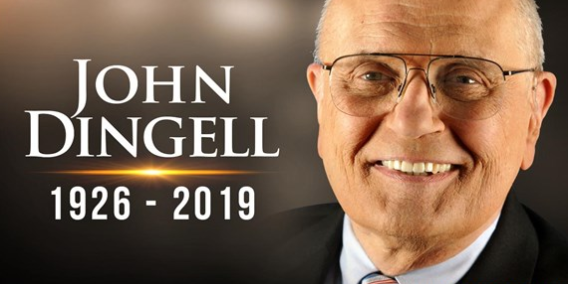 At John Dingell’s funeral, Former Vice President Joe Biden praised the former Congressman. “He believed everyone — everyone, without exception — was entitled to be treated with dignity,” he said. “Dignity was how John walked, dignity was how John talked, dignity was how John carried himself.”
John Dingell’s legislative legacy is extraordinary. Serving in the House of Representatives for 59 years, from the presidencies of Dwight Eisenhower to Barack Obama, his legislative accomplishments included key roles in enacting: Medicare, Social Security, the Affordable Care Act (2010), the Children’s Health Insurance Program (CHIP), the FDA Food Safety Modernization Act, Civil Rights Act, the 1990 Clean Air Act amendments, the Clean Water Act, the Endangered Species Act, and the Public Broadcasting Act of 1967. He also assisted in drafting the Patient’s Bill of Rights, and establishing the first international wildlife refuge in North America. He played a key role in supporting the automotive industry throughout his tenure.
His ability to work across the aisle was well-known, as was his sense of humor. His tweets are legendary, with a couple of examples below:
Feeling old because you remember when Pluto was a planet back when you were younger? I was born before they even discovered the darn thing.9:25 PM – Jul 14, 2015
I’ve been trying to repeal and replace the United States Senate since 1955. No luck. 11:04 PM – Jul 27, 2017 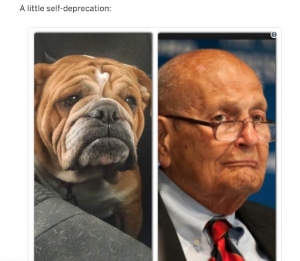 John Dingell once said he preferred to not be remembered for his longevity or the record tenure in the House. He wanted to be remembered for what he did while he was here. As we hold your family in our thoughts, we remember you and thank you, John Dingell, for all you did to repair our world.
Category: Newsletter HighlightsFebruary 14, 2019Leave a comment
Tags: activismCivil RightscongressDingellgovernmentMichiganprogressive