You are here:
In The SpotlightNewsletter HighlightsPortraits in Progressive Activism 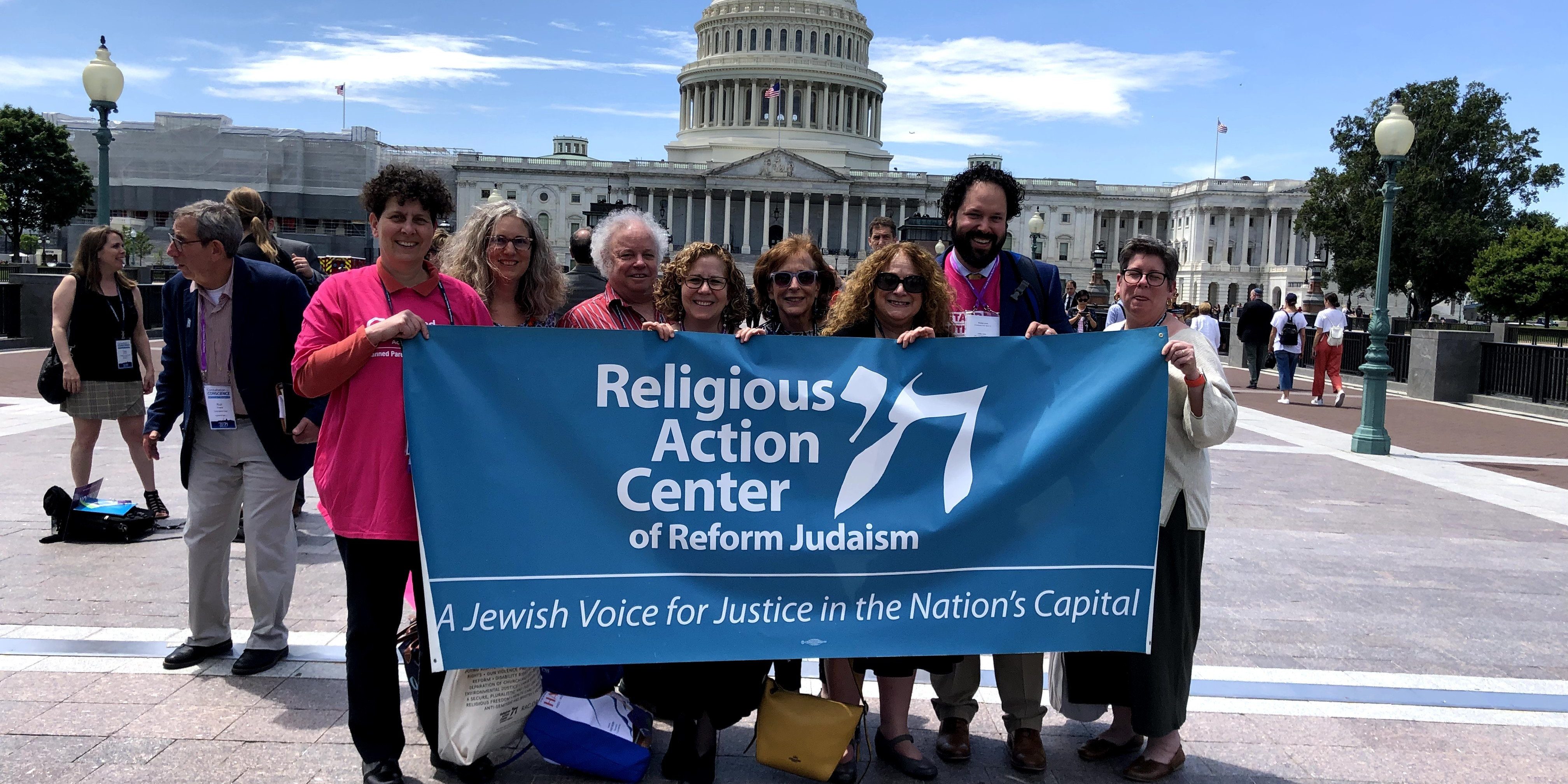 Last month, a delegation from Ann Arbor’s Temple Beth Emeth (Rabbi Josh Whinston, Cantor Regina Hayut, Abbie Egherman, Carol Freedman-Doan, Ken Wachsberger, Trina Fuller, and Sonya Lewis) traveled to Washington, D.C. to participate in the Religious Action Center of Reform Judaism’s 2019 Consultation on Conscience. This three-day conference attracted over 1,000 Jewish leaders from across the country and addressed numerous social justice issues including immigration, criminal justice reform, gun violence, reproductive justice, and the rise of anti-Semitism and white supremacy.
Notable presenters included Rev. Al Sharpton who spoke of the need to work collaboratively to combat all forms of bigotry in America. Sister Norma Pimentel, executive director of Catholic Charities of the Rio Grande Valley, described her tireless work providing emergency humanitarian services for refugees and asylum seekers in McAllen, Texas. Activist Desmond Meade described his personal journey through the criminal justice system and his triumphant emergence as a champion for the restoration of voting rights for felons who have completed their sentences. Author Eric Ward discussed the rise of white supremacy, and its particular manifestations through racism and anti-Semitism. Elias Rosenfeld, a college student, and DACA recipient, spoke about the daily fear he endures, not knowing if he will be able to continue his studies or if he will find himself deported to a country he has never known. Matt Deitsch, a survivor of the Marjory Stoneman Douglas shooting in Parkland, FL, and co-founder of the youth-led March for Our Lives, spoke about the urgent need to address rampant gun violence in our nation. University of Florida student, Zoe Terner, a leader in the Reform Jewish Youth movement and gun violence prevention activist, spoke about effective advocacy and youth engagement.
Breakout sessions gave participants the opportunity to discuss a variety of topics in smaller groups. Some examples of discussion topics included:
The final day of the conference featured compelling addresses from prominent politicians. Most notably, United States House Speaker Nancy Pelosi encouraged participants to actively engage in civic life and social justice advocacy. Invoking the words of Abraham Lincoln, Speaker Pelosi stated, “Public sentiment is everything. With it, we can accomplish anything.” Other politicians addressing the group included Senator Chris Coons (DE), Rep. Pramila Jayapal (WA), Rep. Ted Deutch (FL), and Paul Teller, representing the Trump administration. Rep. Kim Schrier (WA), a pediatrician as well as the first female physician elected to the US Congress, gave riveting remarks about the importance of protecting reproductive freedom.
The conference concluded as participants headed to Capitol Hill to lobby members of Congress directly. The Ann Arbor delegation met with staff members from the offices of Rep. Debbie Dingell and Senator Debbie Stabenow, to lobby for the Dream Act (S. 874), the Secure Act (S. 879), and the Fair Chance Act (S. 387/HR 1076).
The Dream and Secure Acts, if passed, will create permanent protections and a pathway to citizenship for 2.5 million DREAMers, Temporary Protected Status (TPS) holders and Deferred Enforcement Departure (DED) status holders, shielding them from the ever-present threat of deportation.
Passage of the Fair Chance Act, also known as “ban the box” legislation, will support successful re-entry into the work-force for nearly 10 million individuals released from American jails and prisons each year who are expected to rebuild their lives following incarceration. This legislation prohibits employers from inquiring about applicants’ past criminal convictions until they have passed the initial phase of the application/hiring process.
Although not originally part of the scheduled events, by coincidence, the Consultation on Conscience took place on the same weekend as the nationally coordinated day of action to stop abortion bans, a day on which pro-choice rallies took place in multiple cities throughout the nation. Prior to meeting with legislators, RAC participants, including all members of the Ann Arbor delegation, had the opportunity to rally outside the United States Supreme Court in support of reproductive choice. This spontaneous opportunity to publicly defend reproductive justice was one of the highlights of a powerful three-day experience.
Categories: In The Spotlight, Newsletter Highlights, Portraits in Progressive ActivismJune 20, 2019Leave a comment
Tags: activismAgainstHateequalityfamilygovernmentMichiganPEGpeoplepolitics