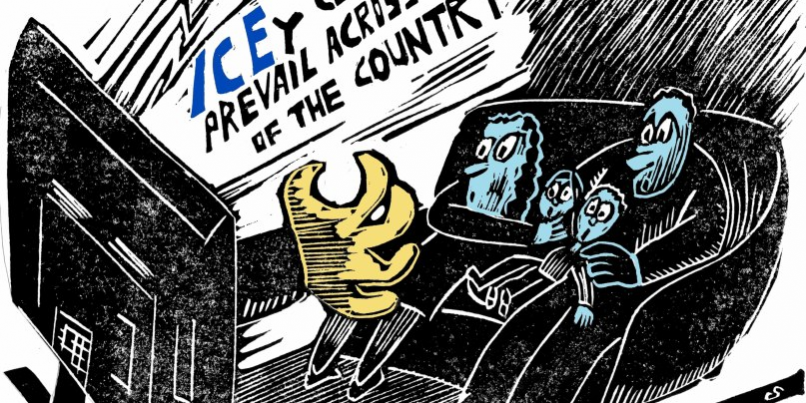 This article discusses one Border Patrol agent’s thoughts of his assignment to the agency’s detention center in McAllen, Texas when the team of court-appointed lawyers and doctors showed up one day at the end of June.

During that visit, the agent, a father of a 2-year-old, realized that something in him had shifted during his weeks in the McAllen center. “I don’t know why she’s shouting,” he remembered thinking. “No one on the other end of the line cares. If they did, this wouldn’t be happening.”

As he turned away to return to his duties, the agent recalled feeling sorry for the lawyer. “I wanted to tell her the rest of us have given up.”

Referring back to the grim conditions inside the Border Patrol holding centers, he said: “Somewhere down the line people just accepted what’s going on as normal. That includes the people responsible for fixing the problems.”

He also said he did not witness any egregious behavior by his colleagues during his time in McAllen. But he said the agents who were permanently posted there had the shortest fuses, and he’d heard them launch into condescending harangues at the young migrants, blaming them for crossing the border illegally and denying their requests for extra food, water or information about when they’d be released.

Most of his colleagues, he said, fall into one of two camps. There are the “law-and-order types” who see the immigrants in their custody, as, first and foremost, criminals. Then, he said, there are those who are “just tired of all the chaos” of a broken immigration system and “see no end in sight.”

In addition to the interviews, the agent shared a journal entry about his time in McAllen, which he wrote in a tentative attempt to sort through what he described as the “roughest” experience of his career; a month that he said revealed a disturbing capacity for detachment.

“What happened to me in Texas is that I realized I had walled off my emotions so I could do my job without getting hurt,” he said. “I might not like the rules,” he added. “I might think that what we’re doing wasn’t the correct way to hold children. But what was I going to do? Walk away? What difference would that make to anyone’s life but mine?”

When asked whether he simply stopped caring, he said: “Exactly, to a point that’s kind of dangerous. But once you do, you feel better.”

The article also discusses that this was the most difficult assignment as a 13 year veteran as a Border Patrol Agent.  Although communications between Border Patrol Agents and visitors was designed to be limited, this agent said he was trying to communicate to the lawyers that the detainees were not the only ones at the facility who felt trapped. Walking away, at least in his mind, was not an option. “The most I felt I could do was make sure toilet paper was stocked. Or if someone wanted an extra juice, I’d give them an extra juice. Or maybe do something to make someone’s day a little nicer; maybe smile and treat them with respect. That’s all I felt I had the power to do,” the agent said. “The ones that try to save the world, they’re the ones who either get burned out or put on a leash.”