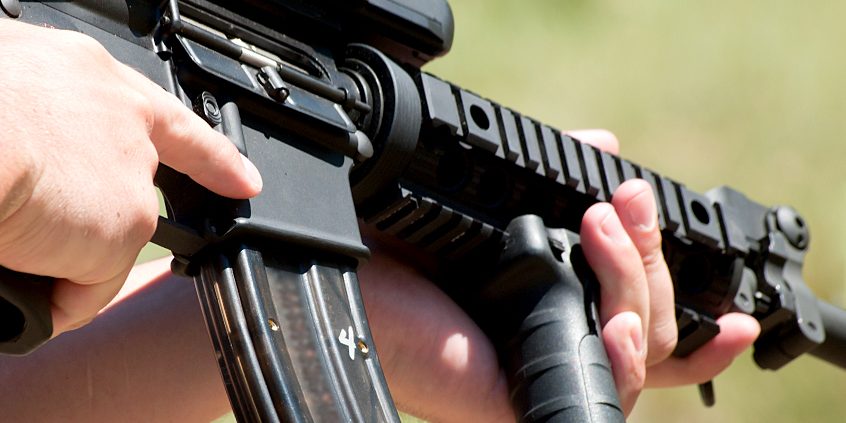 Late last month, National Rifle Association Chief Executive, Wayne LaPierre, met with Donald Trump to discuss ways in which the NRA could support Trump in his fight against impeachment and his bid for 2020 re-election. In the course of this conversation, LaPierre reportedly asked that Trump “stop the games” in exchange for the organization’s full throated backing.
Exactly what “games” was LaPierre alluding to?
Trump, who received over $30 million in campaign donations from the NRA in the lead-up to the 2016 election, has taken an inconsistent public stance on the issue of guns, at times hinting that he might be open to supporting legislation that the NRA virulently opposes, only to reverse himself when pressured to change course.
Following the 2018 shooting in Parkland, FL, Trump sent shockwaves through the NRA and Republican establishment when he voiced support for “red flag” type legislation that would prohibit high risk individuals from legally accessing firearms. In a speech before Congress, he proclaimed, “I like taking the guns early, like in this crazy man’s case that just took place in Florida … to go to court would have taken a long time…Take the guns first, go through due process second.” (It should be noted that red flag bills go to great lengths to preserve due process in order to protect the rights of those who are served such risk protection orders. Trump appeared eager to push the envelope far beyond the letter of the proposed law.) In this same meeting, Trump admonished members of Congress for fearing the NRA, suggesting that he would be willing to provoke the ire of his benefactor by giving lip service to ideas that the NRA finds distasteful.
Soon after Parkland, Trump also suggested that he would consider tightening background checks and raising the minimum age to legally purchase firearms from 18 to 21. Yet, soon after his brief flirtation with sensible gun policy reform, he predictably backtracked, reassuring a jittery NRA, “Your Second Amendment rights are under siege. But they will never, ever be under siege as long as I’m your president.” In February of 2019, Trump publicly opposed two key bills passed by the U.S. House House of Representatives: H.R. 8 (The Bipartisan Background Checks Act) and H.R. 1112 (The Enhanced Background Checks Act). Despite the fact that universal background checks are supported by an overwhelming majority of the American people, the White House claimed that these two pieces of legislation would confer too great a burden upon gun purchasers, an inconvenience that apparently troubled the president far more than the free flowing American blood that is shed on our city streets each day.
Following this summer’s back-to-back shootings in El Paso, TX and Dayton, OH, Trump again circled back to strengthening background checks when he said, “I’m looking to do background checks. I think we can bring up background checks like we’ve never had before … [Congress is] getting close to a bill.” Yet, days later, following a timely phone call with Mr. LaPierre, Trump once again fell back in line, making it clear that he would not support anything that smacked of gun control. Parroting NRA talking points, he easily caved to the NRA’s pressure, inaccurately stating, “We already have strong background checks.”
While Trump has not advanced major gun policy reform, he can be credited with issuing a ban on bump-stocks, the apparatus that enables semi-automatic rifles to function as automatic rifles, and was used to kill 58 people and wound hundreds more at a Las Vegas concert in 2017. While Trump may try to tout this ban as a significant achievement, in truth, this move is best construed as a symbolic gesture. With the exception of the Las Vegas massacre, bump-stocks have not contributed to the torrent of American gun carnage that kills nearly 40,000 individuals annually.
While it is an intriguing thought exercise to imagine Donald Trump, of all people, emerging as an unlikely champion of gun reform, it is clear that this fantasy is fake news. Trump will never offer any meaningful opposition to the NRA or embrace legislation that is likely to alienate his base. While he may relish the attention associated with portraying himself as a maverick, unafraid of angering the gun lobby, this is simply dramatic posturing, a plot twist in Trump’s ongoing manipulative reality TV approach to the presidency. In other words, as Mr. LaPierre described it, Trump’s exhausting series of pronouncements and immediate reversals are simply games.
It should come as no surprise that this embattled president has wedded himself to the NRA, even as the organization itself becomes increasingly embroiled in sordid allegations of self dealing, infighting, and Russian collusion. As both Trump and the NRA face uncertain futures, they are bound to one another in unholy matrimony, kindred spectral spirits driven by an insatiable desire for personal and financial gain at all costs.
Mr. LaPierre is absolutely correct in asserting that it is time to stop playing games. It is beyond time that we stop playing Russian Roulette with our children’s lives and our nation’s future. As 100 Americans die from gun violence every single day, we can stanch the bleeding by implementing life saving measures including universal background checks, red flag laws, a ban on assault weapons, and unencumbered CDC funding for research on the causes of and solutions to gun violence.
As we head into the 2020 elections, it is our responsibility to vote for candidates who will not be strong-armed by the dazzling allure of bright red blood money. In order to free ourselves from the deadly iron grip of the gun lobby and its purchased politicians, we must elect leaders who are unwaveringly committed to enacting common sense gun safety legislation. Through our voices and through our votes, we have the opportunity to stop participating in the NRA’s wicked war games. Together, through our voices and our votes, we have the power to stop the carnage.
Categories: In The Spotlight, Newsletter HighlightsOctober 10, 2019Leave a comment
Tags: activismactivistcongressgovernmentmass shootingsMichiganPEGpoliticsprogressiveTrumpvotevoting