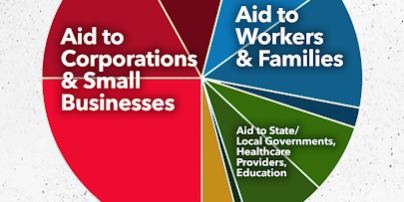 By April 7, it is widely known that the $2.3 Trillion CARES Act is prolific in its enormity but vital to help American citizens and industries survive the COVID pandemic. Less understood are the budget allocations and more importantly, its inherent loopholes that fail to assist those that need relief just as acutely as the rest of the population. The Congressional Budget Office has yet to evaluate the budget numbers enacted, therefore numbers are estimated, still in flux and often categories overlap.

The largest portion of the Act allows aid for households through unemployment expansion in addition to a state’s provisions and a  payment potentially starting mid-April. These household checks are one-time payments only for an amount less than the average mortgage. As far as who receives cash assistance, it is mandated that payments will be made to everyone who has a social security number. However, as with any such blanket statement, there are conditions.

On April 4, the Treasury assured Social Security recipients that they will use their information to direct deposit. For those without such information on file, paper checks will be issued, but the wait could take up to September. For other people with low or no income, who typically don’t need to file taxes and didn’t file for 2019, won’t qualify, though some still can file. It is unclear how these vulnerable citizens are to file their taxes when access to the internet or the assistance needed is now out of reach during this period of closures. Similarly, struggling individuals without a home or fixed address and those recently released from prison may not qualify. The undocumented are ineligible.

Due to a loophole in the Act, many college students and young adults do not qualify for relief payment if they are dependents; instead, their claimants receive additional funds in their payments. In the same vein, some federally managed student loans can be deferred without interest through September, although no direct relief for student loan payments was allocated.  In a major oversight, adults claimed as a dependent on tax returns — including adult children with disabilities living at home and elderly parents — will not qualify for the payments, but their families will not get any additional money on their behalf to support ongoing care.

For small businesses, the Act provides $349B in Small Business Administration (SBA) loans for overhead and payroll. Though loans can be up to $10 million and are federally backed, it should be noted that interest begins to accrue immediately at the time of disbursement – even if the business has not reopened yet. The first repayment can be deferred up to a year, but interest will mount in the duration. And this is only the first of a few negatives for the disaster relief.

According to the NY Times, in a sample loan application posted on the SBA website, “the fine print contains a line that gave [one business owner] pause: Borrowers must promise to buy only American-made equipment and products ‘to the extent feasible.’” Even for those that have already applied and been approved, their loans have yet to be received. Banks and lenders are unwilling to disburse the loans when the government has not indicated how they will guarantee the loans or how banks should recover the funds from the government should a default occur. Without such direction, many banks have implemented their own methods of determining who they will lend to; and it is far more restrictive and lengthy of a process than promised.

Of the total budget, only approximately $185B in Public Health aid is allotted to health care facilities and providers, however, it is unclear if funds extend to cover COVID testing and treatments for everyone, including the uninsured, the homeless and the undocumented in detention centers or those in fear of going to a clinic. The funds are also split with the VA, CDC programs and response, for the FDA to prioritize and expedite drug approvals, and approximately $16B for the national stockpile to increase the availability of ventilators and masks.

States and municipalities are allocated $175B  to apply toward lagging expenditures for COVID response from a high number of cases, other essential infrastructure support (transportation, water, power), as well as community block grants, schools, and child care centers. Funding is split with tribes and territories, though they are to be distributed proportionally according to population, and some will be set aside for local governments with populations larger than 500,000. It is hoped states are able to assist family caregivers of disabled dependents.

The “other” and “safety net” categories chiefly include nutrition programs like Food Stamps, free meals for children and support for community food banks. Tribes and territories also all get additional access to federal nutrition programs. However, the total funding allocated is only $26B for all states, territories, and reservations, a sum that is insufficient to support the needs of those depending on these programs to survive.

In short, the relief package is welcome, however, it’s spending details are not only undefined but unreliable. The biggest oversights are housing concerns not only for those that don’t have it but for the millions out of work and unable to pay rent or mortgages. There has been no freeze on deferred mortgage interest rates, little additional funding for homeless shelters (currently running on skeleton crews)

Finally, in what is not likely be the last update, the President has moved to fire the former Department of Justice inspector general leader of a new watchdog panel specifically formed by CARES Act and charged with overseeing the Administration’s spending. With no oversight for budgetary spending, this move compounds more doubt as to who will actually receive assistance and how quickly.