Amid threats and political pushback, public health officials are leaving their posts

You are here:
CORONAVIRUSNewsletter Highlights 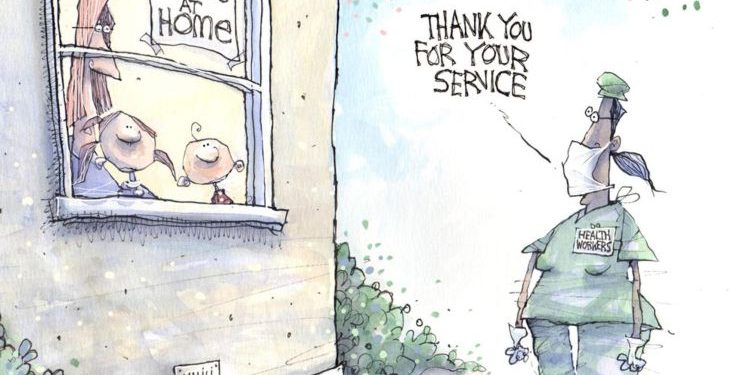 Top infectious-disease expert Anthony S. Fauci spoke with The Post on June 18 about how the U.S. is still in the first wave of the novel coronavirus. (Allie Caren/The Washington Post).

Public health workers, already underfunded and understaffed, are confronting  waves of protest at their homes and offices in addition to pressure from politicians who favor a faster reopening.

More than 20 health officials have resigned, retired or been fired in recent weeks “due to conditions related to having to enforce and stand up for strong public health tactics during this pandemic” states Lori Tremmel Freeman, chief executive of the National Association of County and City Health Officials.’

Although shutdown measures are broadly popular, a vocal minority vehemently opposes them.  This has resulted in attacks on officials’ race, gender, sexual orientation, religion, and appearance.

Read the article to see how public health officials, who are interested in assisting the American public with staying well during this pandemic, are being harassed, through social media and phone calls and visits to their homes and offices.

On Tuesday, Dr. Anthony S. Fauci told Congress that he was seeing a “disturbing surge” of infections in some parts of the country, as Americans ignore social distancing guidelines and states reopen without adequate plans for testing and tracing the contacts of those who get sick.

Seven states are reporting new highs for current coronavirus hospitalizations, according to data tracked by The Washington Post — Arizona, Arkansas, California, North Carolina, South Carolina, Tennessee, and Texas — as the number of infections continues to climb across the South and West. More than 800 COVID-19 deaths were reported in the United States on Tuesday, the first time fatalities have increased since June 7.

Worldwide, there are more than 9 million confirmed cases of the novel coronavirus, with more than 2.3 million cases and at least 119,000 deaths reported in the United States.

In spite of Mr. Trump’s urging to decrease testing and his optimism that this virus will quickly dissipate, Dr, Fauci opines that “The virus is not going to disappear.