Justice and the Police 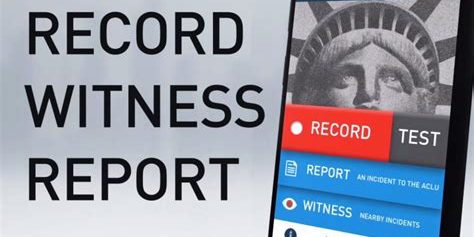 The ACLU’s Mobile Justice apps assist in using your phone to photograph and record police conduct.  There are 16 states that allow the use of mobile apps, Michigan is one of those states.  Only New York can use the Stop and Frisk app.

The article, How to Record a Video during a Protest, educates the reader on what to record, how to record, how to protect your phone, the law, and how to share images. These mobile apps are built for this kind of documentation and are designed to comply with local laws in different states. (Witness has tips on choosing a documentation app—several are available in addition to the ACLU’s.)

From a legal perspective, one has the right to take a photograph or a video of anything in a public space, including police activity. Police can’t legally demand your phone or coerce you to show them your images without a warrant. However, your cell-phone camera doesn’t give you a free legal pass to do anything you want. You’re not allowed to physically interfere with law enforcement operations and the police have discretion over what counts as interfering. If a police officer orders you to step back, you should do it.

Recording audio, including sounds captured during the video recording, is not as straightforward.  In some jurisdictions, it’s illegal to record someone’s voice without their consent. However, according to the American Civil Liberties Union, making audio recordings of the police is legal in nearly all cases. You will want to check state laws to be sure of your rights.

The Hill reported that on Monday, June 8, 2020, Democrats in both houses introduced legislation that would “establish a federal ban on chokeholds, eliminate the legal shield protecting police from lawsuits, mandate the use of body cameras nationwide, ban military-style weapons for police and create a national database disclosing the names of officers with patterns of abuse.” It also would make lynching a federal hate crime.

This legislation, crafted by leaders of the Congressional Black Caucus, aims to rein in the use of excessive force by law enforcers, particularly the violence targeting blacks and other minorities who die disproportionately at the hands of police. The bills are yet unnumbered.

Democratic leaders framed the reforms as a crucial and long-overdue remedy to racial injustices in law enforcement, which they described as a systemic plague rooted in hundreds of years of slavery, bigotry, and cultural bias. Although the Democrats want to pass this legislation through the House before the end of June, this legislation will most likely create a battle with Republicans in the Senate and White House, who are already voicing concerns that the proposal goes too far to limit the powers of police to fight crime. In fact, Attorney General William Barr on Sunday rejected the notion that the nation’s criminal justice system suffers from widespread racial prejudice — “I don’t think that the law enforcement system is systemically racist,” he told CBS’s “Face the Nation” — revealing that the parties are not agreed on the problem, let alone a legislative solution.

The Chairwoman of the Congressional Black Caucus Rep. Karen Bass, D-Calif., called the legislation a “transformative vision of policing in America.” During an interview on Morning Edition‘s Rachel Martin, she said the biggest change the legislation would bring is a shift in police culture. “Raising the standards, having national certification and raising the level of policing in the United States so that it is like many other professions,” Bass described. “The profession that has the power to kill should be a profession that has national standards, is transparent, and is accountable to the public.”

Democrats are not opposed to law and order.  In fact, Majority Leader Steny Hoyer (D-Md.) stated that we need the protection of property and lives, but empowering police departments does not mean turning a blind eye to abusive officers

Read these articles and the proposed legislation; contact your legislators.  There must be accountability!  Without accountability, nothing will ever change.

Make sure your family and friends register to vote and actually vote.