Mail-In Voting: The new bullet in the voting process 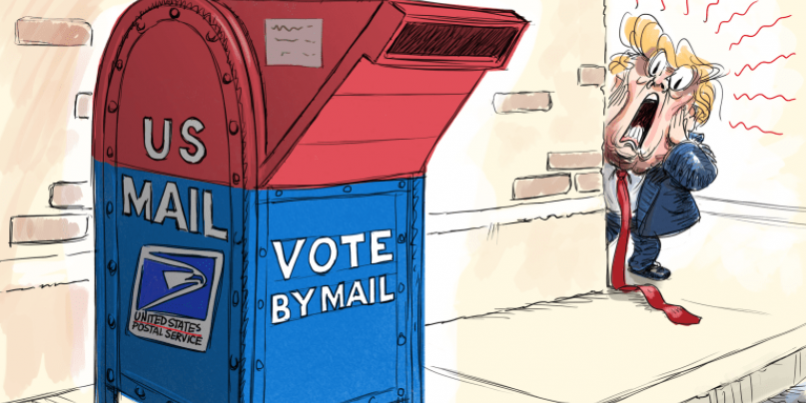 According to the Guardian, the next battleground in the war between Republicans and Democrats for control of the electoral map is absentee voting. As increasing numbers of voters eligible to vote by mail, the pressures created on officials by this expanded process can lead to increasing numbers of ballots rejected. “The odds are you’re having more people who are not familiar with the process, they’re not going to have people there to help and assist as you would in person,” says Daniel Smith, professor at the University of Florida.
The CDC recommends mail-in voting because of the pandemic. Across the country, both Democratic and Republican officials have expanded mail-in voting because of the health risk of in-person contact.
Trump is maligning mail-in voting, calling it a “fraudulent” practice, despite the fact that he voted absentee, despite the consistent research which finds little evidence of fraud. Republican officials around the country are spending millions in court challenges to mail-in ballots and Trump is threatening both the struggling US postal system and battleground states which have expanded mail-in voting.
Voters should be aware of its pitfalls of mail-in voting such as flipping the ballot over to ensure that you don’t miss any candidates. Or, the required signature on the envelope. If that final step in voting is forgotten, the ballot is invalid. More seriously, that signature is subject to the discretion of partisan and untrained handwriting experts.
Mistiming is another pitfall in the absentee voting process. Election officials, presently inundated for requests for mail-in ballots, can have trouble getting them out in time. Similarly, voters must get them in on or before election day. As only 14 states allow election officials to accept ballots postmarked on or before election day if they arrive in the days after, according to the Brennan Center for Justice, thousands of votes have been disqualified because of the late arrival of their ballot. An NPR analysis has drawn a similar conclusion: In the primary elections held so far this year, at least 65,000 absentee or mail-in ballots have been rejected because they arrived past the deadline, often through no fault of the voter. One Democratic operative recommends hand delivery of absentee ballots.
Category: Newsletter HighlightsJuly 16, 2020Leave a comment
Tags: absentee votingMichiganPEGpeoplepoliticsprogressiveUnited Statesuspsvotevotervoting