The long struggle of the suffragists: The Woman’s Hour – A Review 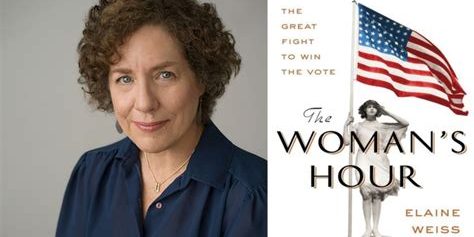 by Ellen K. Halter
During this year, the centennial of the passage of the Nineteenth Amendment granting women the vote, the year the first African American woman was nominated to the vice-presidency, I read The Woman’s Hour: The Great Fight To Win The Vote.
Elaine Weiss’s thoroughly-researched recounting of the machinations in the eleventh hour of the ratification of the Amendment documents how close the fight for the vote for women nearly failed. She focuses on Tennessee, which became the thirty-sixth stately te to ratify, putting the amendment over-the-top to victory.
She provides a view of suffragists desperate to get this final state to ratify the amendment. They cajoled, greased palms, bribed, even tracked down a stray legislator to vote. Sadly, the white women at the fore of this struggle made bargains with the devil, forsaking their African American compatriots in this southern state in order to obtain the vote for white women.
In the end, the ratification of the Nineteenth Amendment came down to one vote, and he only voted for it because his mother urged him to do so. Note well how one vote changed history!
Weiss doesn’t mince words regarding the outcome of ratification. On the first election day, women were permitted to vote, “American democracy was disgraced,” as she puts it, by the violent suppression of the black vote throughout the nation. Moreover, Asian Americans had a long wait until they could vote, the Japanese not permitted until 1952. Even Native Americans were not granted the vote until 1924 although their vote continued to be suppressed until 1957.
Although at times Weiss’s history is bogged down in details, she engenders the desperation of the suffragettes in the final days of ratification of the Amendment.  She quotes Carrie Catt, a leader of the ratification effort, who implored, “The vote is the emblem of equality, women of America, the guaranty of your liberty.” In memory of these women who devoted their lives to obtaining the vote for women, we should all cast our ballots, every election, every year.
Category: Newsletter HighlightsSeptember 24, 2020Leave a comment
Tags: activismblack americansgovernmenthistoryPEGpoliticsUnited Statesvotervotingwomen