PEG Exclusive – The Electoral College Part I of II 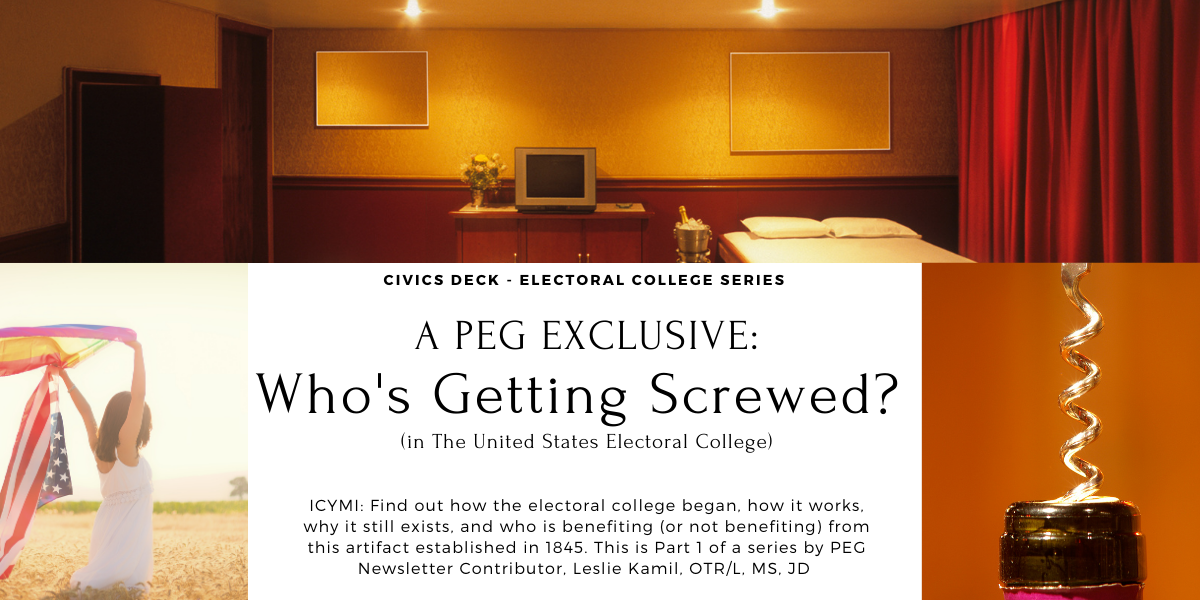 The Founding Fathers debated for months over how to elect the president.  Some argued that Congress should pick the president and others insisted on a democratic popular vote. Their compromise is known as the Electoral College. The system calls for the creation, every four years, of a temporary group of electors that are each appointed by the states.

How Are Electors Chosen?

Each state has its own method for choosing electors. Today, the most common method of selecting is by state party convention. In a smaller number of states, electors are chosen by a vote of the state party’s central committee.

There are 538 total electors, including one for each U.S. senator and representative and three electors representing the District of Columbia. Technically, it is these electors, and not the American people, who vote for the president. In modern elections, the first candidate to get 270 of the 538 total electoral votes wins the White House. Most of the time—but not always—the winner of the Electoral College is also the winner of the popular vote.

On the first Monday after the second Wednesday in December, this year December 14, 2020, members of the Electoral College meet in their respective states and cast their official votes for president and vice president. Forty-eight states and the District of Columbia have a winner-take-all system, in which the party whose candidate wins the popular vote in a state appoints all that state’s electors to the Electoral College. Maine and Nebraska have a “district system.” They appoint electors depending on who won the popular vote in each congressional district, plus two electors who are pledged to vote for the overall winner of the state’s popular vote.

In 2020, the U.S. Supreme Court ruled that the Constitution does not require that people elected to serve in the Electoral College be free to vote as they choose. Instead, the Court held, states have the constitutional power to force electors to vote according to their state’s popular vote. At the time of the Court’s decision, 32 states had passed laws that bind electors, while 18 states had laws on the books giving electors the freedom to vote independently—ensuring that in more ways than one, the Electoral College could continue to provide drama for the foreseeable future.

Facts about the Electoral College

Why Does the Electoral College Still Exist?

It is believed that the party in power typically benefits from the existence of the Electoral College, and the minority party has little chance of changing the system because a constitutional amendment requires a two-thirds supermajority in Congress plus ratification by three-fourths of the states.

Next Week: PEG will discuss the NATIONAL POPULAR VOTE INTERSTATE COMPACT and the role that the Electoral College has in today’s politics.