Who continues to be screwed? (Part II in Electoral College Series) 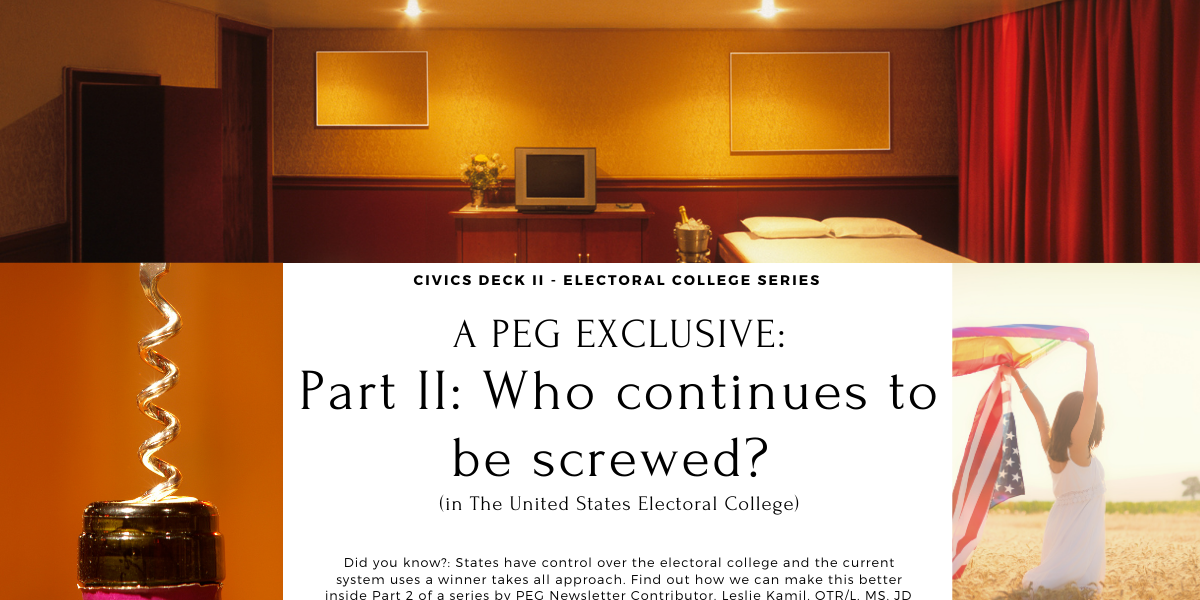 States have control over the Electoral Votes

The U.S. Constitution, Article II, Section 1, gives the states exclusive control over awarding their electoral votes: “Each State shall appoint, in such Manner as the Legislature thereof may direct, a Number of Electors….” The current system of the winner-take-all method of awarding electoral votes is state law. It is not in the U.S. Constitution.

The current system of electing the President is based on “winner-take-all” laws that have been enacted by state legislatures in 48 states. These laws award all of a state’s electoral votes to the candidate receiving the most popular votes in each state. The downside of this process is that presidential candidates have little or no reason to pay attention to the issues or concerns of voters in states where the outcome is highly anticipated.  In the 2020 election; we all witnessed continual visits to such states as Michigan and Pennsylvania. Other states that were “guaranteed” to be either Republican or Democratic, such as the Dakotas and California, respectively, had considerably fewer visits by the presidential candidates.  Refer to the charts here to see the states that hosted campaign events in the 2012 and 2016 elections. In addition, the “winner-take-all statutes adversely affect governance.  “Battleground” states receive 7% more federal grants than “spectator” states, twice as many presidential disaster declarations, more Superfund enforcement exemptions, and more No Child Left Behind law exemptions.  Lastly, these statutes have allowed five of our 45 Presidents to take office without having won the most popular votes nationwide.

The National Popular Vote Interstate Compact  (NPV) is a state-based approach that preserves the Electoral College, state control of elections, and the power of the states to control how the President is elected. This legislation will guarantee the Presidency to the candidate who receives the most popular votes across all 50 states and the District of Columbia. The Compact ensures that every vote, in every state, will matter in every presidential election.

The National Popular Vote bill has been enacted by 16 jurisdictions with a collective total 196 electoral votes, including 4 small states (DE, HI, RI, VT), 8 medium-sized states (CO, CT, MD, MA, NJ, NM, OR, WA), 3 big states (CA, IL, NY), and the District of Columbia.  The bill has passed at least one chamber in 9 additional states with 88 more electoral votes (AR, AZ, ME, MI, MN, NC, NV, OK, VA).  A total of 3,408 state legislators from all 50 states have endorsed this process. The bill will take effect when enacted by states with 74 more electoral votes, enough to elect a President (270 of 538).

The difference between the two methods is that in the winner-take-all method a voter has a direct voice in electing only the small number of presidential electors to which their state is entitled.  Under NPV, every voter directly elects 270+ electors.

Relationship of the Census and the Electoral College

The number of electoral votes designated to each state is based on a state’s combined number of representatives in the House and Senate.  While the census data is not yet complete, analysts have projected that the shift in the population from the Northeast and Midwest to the Sun Belt will impact the number of representatives in many states, thus changing the number of electoral votes in many states.  A projected map recently released by Election Data Services shows that 10 states will probably lose at least one House seat in the next congressional reapportionment. That means they’ll lose at least one electoral vote as well.  Based on the 2016 election results, those losses are spread evenly between red and blue states.  Review these maps to get a more thorough understanding of the possible changes and how this might impact the strategies for the 2024 presidential campaigns.

The winners and losers as projected:

The gain and loss of seats through this process – known as reapportionment – has two major impacts.  The first is the balance of power in the U.S. House, which the Democrats took over in 2018 but seats slightly decreased in 2020.  The second involves the presidency, since the new seats will shift the numbers of electoral votes these states have. Democrats will mourn losses of seats in blue states such as California, Illinois, New York, and Rhode Island, while Republicans will bemoan the loss of seats in Alabama and West Virginia.  The most impactful changes will occur in the hotly contested battleground states, such as Arizona, Florida, North Carolina and Texas.

Regardless of your political affiliation, you have a dog in this fight!!  Study the projected electoral map after the 2020 census.  Gain a better understanding of the projected changes and contact your legislators if you are interested in advancing the National Popular Vote Interstate Compact.