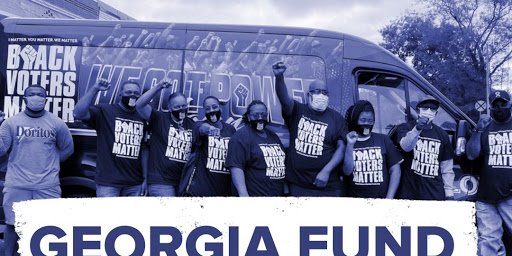 Many have asked the best place to send money to help win the senatorial election in Georgia in January.

A friend shared his thoughts on this with us:

“I wrote this as a Twitter thread last week after it was reported that Sara Gideon finished the election with $14 million in the bank. I’m sure Jaimie Harrison and Amy McGrath are in the same boat. At some point it just becomes impossible to spend all of the money we send them in a useful way….

Yep. Don’t give your money to Gideon or Ossoff or even Warnock.

They also help these people organize themselves so that they can advocate for their own priorities — a novel concept— which leads to them BEING and, importantly, FEELING empowered.

This leads to increased trust in institutions and the political system, which in turn grows participation and voter turnout.

In Georgia, you can invest in local organizations like Fair Fight Action or if you want to have a broader impact, Movement Voter Project, which invests in these grassroots organizations in targeted geographies.

For 2020, their highest priorities were Arizona, Michigan, Florida, Wisconsin, and Pennsylvania.

They invested (starting in 2016) in a couple of dozen local organizations that were embedded in the communities they wanted to serve and engage.

For the Georgia runoff, they have a separate fund that invests in groups like @fairfightaction. You can donate to it here: secure.actblue.com/donate/ga-fund…

And, $14 million— which would have bought a few minutes of TV ad time for Gideon or Ossoff— has a much greater effect if spent at the local level on real people doing real work.

YEARS. And in that time, there would have been real progress towards making our society more just and more equal.

If you want to win elections for progressive candidates in 2022 and 2024 and beyond. That work starts now!