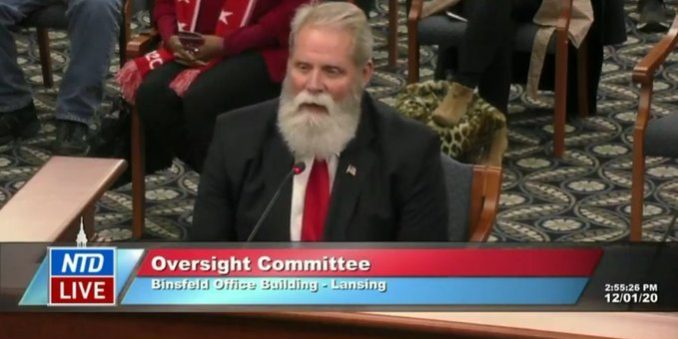 On December 2, The House Oversight Committee, chaired by State Rep. Matt Hall, saw fit to invite Rudy Giuliani to repeat his litany of unfounded accusations of election fraud. After a series of testimonies from many of the citizens who have submitted the affidavits supposed to prove this fraud, which is nicely summed up at this Twitter thread, Giuliani and another lawyer urged the lawmakers to make the election go away and do their duty, naming the electors themselves.

We suggest, with our friends over at WCDP, that you send a note of thanks to Sen. Shirkey at SenMShirkey@senate.michigan.gov.

And for the committee, we suggest taking a page from WethePeopleMI.org. They offer ways to spread a positive narrative to counter the wash of lies and misinformation. Their

Share your story. Our stories matter. What do you think our legislators should be doing instead of perpetuating falsehoods about our election? How have you, your family, or your community been impacted by the COVID crisis? Go live, make a selfie video, or write your story to post on Facebook, Instagram, and Twitter. Be sure to use the hashtag #IfICouldTestify and #FightCOVIDnotVoters.

2) Tell Giuliani to #GoHomeRudy. We don’t need Rudy Giuliani spreading lies about our election in Michigan. His conspiracy theories have failed in courts all over the country, even when they had Trump-appointed judges. The election is certified and done. The conspiracy theory circus being given space at a legislative hearing is an embarrassment. Use the hashtag #GoHomeRudy and let him know we don’t need lies and conspiracy theories in Michigan. Be sure to tag Chair of the Committee, Matt Hall (Twitter: @RepMattHall. Facebook: @StateRepHall).

To the Oversight Committee,

Bipartisan officials and experts have all concluded the same thing: Michigan’s elections were safe, secure and accurate.

Our elected officials should be condemning, not encouraging Rudy Giuliani’s lies and misinformation around our election and should be focused on fighting COVID, not voters. His conspiracy theories have been thrown out in courts across the country.