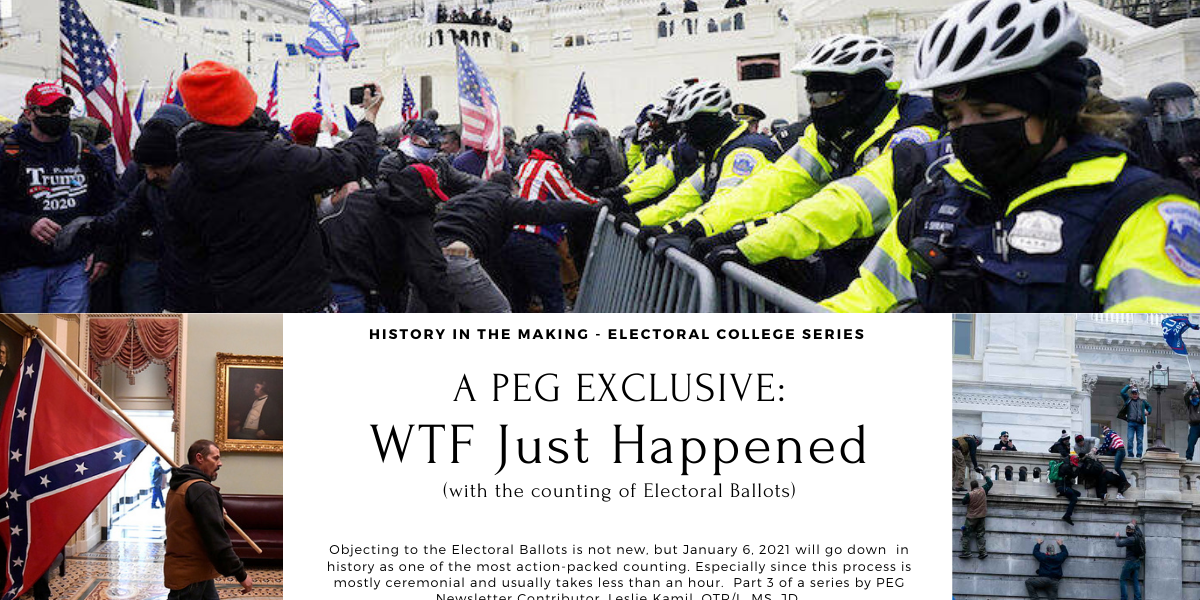 The National Task Force on Election Crises wrote an excellent article on the history and the process.  This task force is a diverse, cross-partisan group of more than 50 experts in election law, election administration, national security, cybersecurity, voting rights, civil rights, technology, media, public health, and emergency response. The mission of the nonpartisan task force is to ensure a free and fair 2020 presidential election by recommending responses to a range of potential election crises.

Below is a short recap of the law and process. There are many articles on the internet that discuss the history, the process, handling of disputes, and summaries of why the 2020 election results would not be overturned.

The Constitution gives Congress the final say in the election before Inauguration Day. Article II, Section 1 says, “The president of the Senate [the Vice President] shall, in the presence of the Senate and House of Representatives, open all the certificates, and the votes shall then be counted.”  So, every four years, the House and Senate come together to formally tabulate the electoral votes and raise any final concerns about the results.

Electoral Count Act (ECA) of 1887 is a US federal law specifically delineating the procedures for the counting of electoral votes by Congress following a presidential election. ECA specifically assigns the President of the Senate the specific duties as the presiding officer in the joint session of Congress: preserving order and decorum; opening and handing electoral vote certificates to the tellers; calling for objections, and announcing the results of votes on objections. The ECA also provides that the vice president shall announce the winning candidates for president and vice president.

At 1 p.m. on 1/6/21, Pence opened a joint session of lawmakers from the House and Senate in the House chamber.  Two wooden boxes containing the states’ certified results were brought into the chamber and the sealed certificates were handed to “tellers”. The role of the “tellers”, newly sworn-in House and Senate members, is to pull out the ballots, one by one from each state in alphabetical order, to determine whether each “seems to be regular in form and authentic” and presents them to the president of the Senate — in this case, Mr. Pence — for inspection and approval.

Once there is an objection that meets the aforementioned requirements, the House and Senate, retire to their separate chambers, for a period of not more than two hours to discuss the objections.  Each member gets up to five minutes to speak in favor of or against the objection.  Then each chamber will vote, with a simple majority required to uphold the objection.

The proceedings then reconvene in a joint session and the vice president announces the decision of the objections submitted.  Congress may not move on to the next state until all objections have been “finally disposed of” in the manner required.

Can the vice president or congress change the election results?

Congress was able to reconvene after many hours to complete the counting of the electoral college ballots and on 1/7/21 Vice President Pence announced Joe Biden and Kamala Harris the winners of the 2020 election.