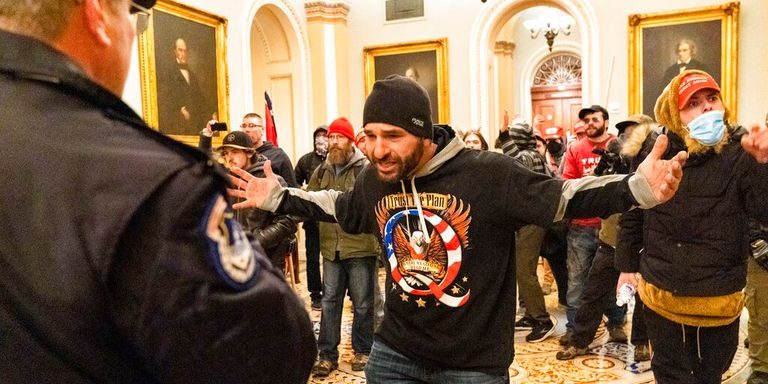 Wikipedia defines QAnon[a]  as a disproven and discredited far-right conspiracy theory[2] alleging that a cabal of Satan-worshipping cannibalistic[3][4][5] pedophiles is running a global child sex-trafficking ring and plotting against U.S. President Donald Trump. Followers, known as Believers, think that Trump was elected to fight the cabal and wage a secret war against elite Satan-worshipping pedophiles in government, business, and the media. Believers have speculated that this fight will lead to a day of reckoning, where prominent people such as former presidential candidate Hillary Clinton will be arrested and executed.

CNN notes that QAnon began as a single conspiracy theory. However, its followers now act more like a virtual cult and have so many offshoots, detours, and internal debates that the total list of QAnon claims is enormous — and often contradictory. Adherents draw in news events, historical facts, and numerology to develop their own far-fetched conclusions.

How and when did QAnon begin?

In October 2017, an anonymous user put a series of posts on the message board 4chan, an online message board that frequently features extremist and bigoted content. The user signed off as “Q” and claimed to have a level of US security approval known as “Q clearance”.

These messages have become known as “Q drops” or “breadcrumbs”, often written in cryptic language peppered with slogans, pledges, and pro-Trump themes.

In its most basic sense, an “anon” is an anonymous or pseudonymous Internet poster.[63] The concept of anons “doing research” and claiming to disclose otherwise classified information, while a key component of the QAnon conspiracy theory, is not exclusive to QAnon. Before Q, a number of so-called anons also claimed to have special government access. The Wikipedia write-up describes various other anons and their relationship with QAnon and the many social media platforms that have QAnon posts.

We all saw the “Believers” march on the Capital on January 6, 2021, and have heard reports that some of these individuals have been identified and arrested.