CIVICS DECK – What is a Filibuster? 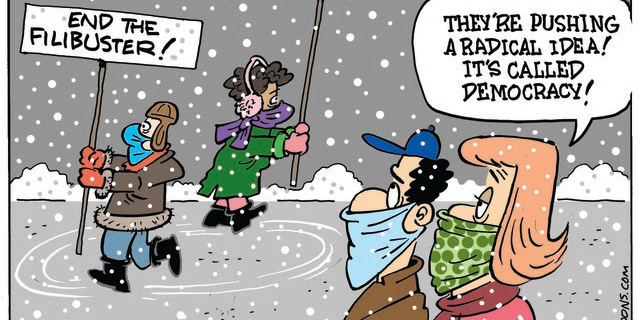 The Guardian sees the filibuster as a way for a relatively small group of senators to block some action by the majority. The filibuster rule allows a minority of 41 senators (out of 100 total) to prevent a vote on most species of legislation. This political strategy takes advantage of a U.S. Senate rule that says a senator, once recognized on the floor, may speak on an issue without being impeded by anyone, thus allowing senators to speak for hours to delay efforts to vote for a bill.
There is no filibuster in the House of Representatives because rules adopted in that larger legislative body strictly limit the amount of time each representative may speak on the House floor.

History of the Filibuster

The first successful filibuster was recorded in 1837. This process has frustrated senators over the years and there have been multiple attempts to abolish the rule. Finally, in 1917, President Woodrow Wilson urged change and lobbied the Senate to adopt Rule 22. Rule 22 authorized a two-thirds vote to invoke “cloture,” or official closure to debate. Upon the vote of a supermajority of senators, the rule limits consideration of a pending matter to a final 30 more hours of debate. Rule 22 was first successfully applied in 1919. However, even with the new cloture rule, filibusters remained an effective means to block legislation, since achieving a two-thirds vote is difficult.
In the early 1970s, the Senate adopted changes that allowed more than one bill or matter to be pending on the floor at once. Previously a filibuster could stop all other matters in the Senate—as long as a senator kept talking. Now, with multiple measures moving at once, leadership can simply set aside a controversial bill as theoretical “debate” continues, and move onto other pressing matters.
By 1975, rules were further changed to make it easier to invoke cloture, requiring just a three-fifths majority vote to end a filibuster, or 60 votes. This is the current rule.
Since the filibuster could be used to block executive and judicial branch nominees, Democrats in 2013 killed the filibuster for executive nominees below the level of Supreme Court justices and in 2017, McConnell killed what was left of the judicial filibuster in order to achieve approval of all of the Trump justices to the Supreme Court. Now cabinet positions and judicial nominations can proceed with a simple majority of 51 votes. Filibusters can now only be used for legislative matters.
Should the Filibuster be eliminated?
There is not an easy answer. The Guardian discusses this issue. Although abolishing the filibuster rule would theoretically allow Democrats in 2021 to finally get some things done while they hold power (immigration reform, climate legislation, voter protections, racial justice legislation, etc.), some Democrats fear that if there is no filibuster, Republicans will pass horrible legislation, such as restricting voter access, once they again have the Senate majority.
Ending the filibuster in 2021 may not net Democrats the legislative victories they desire. Since they hold only very slight majorities in both houses, Democrats would need to maintain a unified caucus to take advantage of a Senate sans filibuster. And that would mean only passing legislation that the most centrist senators agree with.
Categories: Civics Deck, Newsletter HighlightsMarch 4, 2021Leave a comment
Tags: activismfilibusterSenateUnited States