Sunday, March 21, 7 pm. “Have Fun with Chuck and his Chicks”
Chuck Newman will be interviewing Julie Campbell-Bode and Lori Goldman of Fems for Dems on his talk show Conversations with his co host, the very funny Detroit personality, Alan Muskovitz.
As their picture illustrates, Lori and Julie are funny, irreverent and not shy. They are also incredibly inspiring. Learn how they built Fems for Dems into an awesome citizen activist group that is making the government more responsive to the needs of all Americans. The New York Times cited them five times last year because of their amazing work. They also made him title this show “Chuck and his chicks.” Join them and be inspired and entertained. Join the conversation: https://bit.ly/2PbDQyg 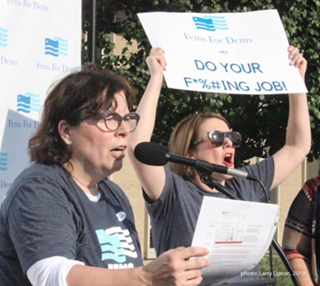