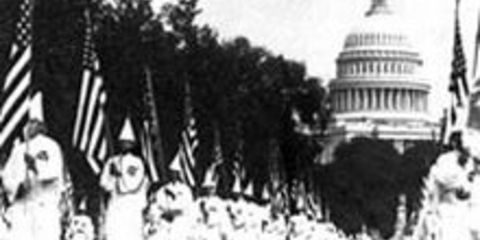 by Leslie Kamil
April 20, 2021, Integrity First for America sent an email reminding its readership that exactly 150 years ago today the Ku Klux Klan Act of 1871 was signed into law. Sadly, the use of this law has increased over the last several years.

In 1871 Ulysses S. Grant requested that Congress pass legislation to address the KKK activities on racially motivated conspiracies intended to deprive people of equal protection under the laws — providing a civil remedy to the victims of private acts of violence motivated by discrimination and racial bias. This federal legislation was necessary as local and state courts were ineffective in prosecuting Klan violence due to either sympathies for or fear of repercussions of the Klan.
The Ku Klux Act of 1871, also called the Third Force Act or the Civil Rights Act of 1871, authorized Congress and President Ulysses S. Grant to declare martial law, impose heavy penalties against terrorist organizations, and use military force to suppress the Ku Klux Klan (KKK). In 1871, usage of this Act led to nine South Carolina counties being placed under martial law and thousands of arrests. In 1883 the Supreme Court struck down the criminal provisions of the act’s second section on the ground that protecting individuals from private conspiracies was a state and not federal function (the United States v. Harris, 106 U.S. 629, 1 S. Ct. 601, 27 L. Ed. 290). This and other rulings stripped the Ku Klux Klan Act of much of its power.
The remaining civil provisions of the act were later codified under 42 U.S.C.A. 1985(3), where they have been referred to as the conspiracy statute. These provisions hold, in part, that when two or more persons “conspire or go in disguise on the highway or the premises of another, for the purpose of depriving… any person or class of persons of the Equal Protection of the law,” they may be sued by the injured parties. The civil provisions, of 1985(3), remained generally unused until the1971 when the Supreme Court in Griffin v. Breckenridge, 403 U.S. 88, 91 S. Ct. 1790, 29 L. Ed. 2d 338 reaffirmed the original intention of 1985(3) and ruled that the statute may allow a civil remedy for certain private conspiracies. The 20th century would see two revivals of the KKK: one in response to immigration in the 1910s and 1920s, and another in response to the African American civil rights movement of the 1950s and 1960s. Various chapters of the KKK still exist in the 21st century.