disproportionately impact voters of color, is officially in the throes of what local activists call “Jim Crow 2.0.” According to Forbes, the sweeping bill outlines numerous new constraints, such as curtailing the amount of — and thus access to — ballot drop boxes, shortening the early voting period and prohibiting non-poll workers from giving food or water to voters waiting in line. In some districts that implies going from over 30 drop boxes to 9. 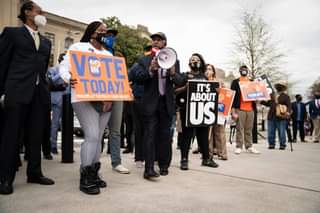