Republican State Senators plan to evade Whitmer’s veto
Republican State Senators have proposed 30+ bills (Senate Bills 273-311) whose net effect would suppress Michiganders’ access to voting.
Aware that Governor Whitmer will veto these bills, the GOP legislators plan to circumvent her veto through a petition. (Michigan is one of two states which allows a successful petition — one which consists of signatures of 8% of the votes garnered by the governor in the last election — to become law.) Thus, if the GOP collects 340,047 signatures, their bills will become law.
Their measures, demanding voter ID, and restricting drop boxes, postage for absentee ballots, and new voting machines among other items, are designed to make it increasingly difficult for the poor and people of color to vote.
This is a serious abrogation of democracy: Governor Whitmer won by about 2.3 million votes, yet 340,047 signatures could negate the authority granted to her by the majority of voters. – Bridge 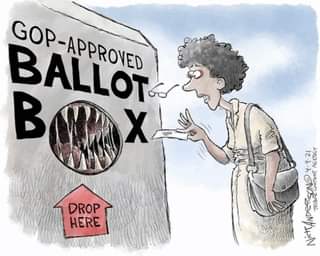