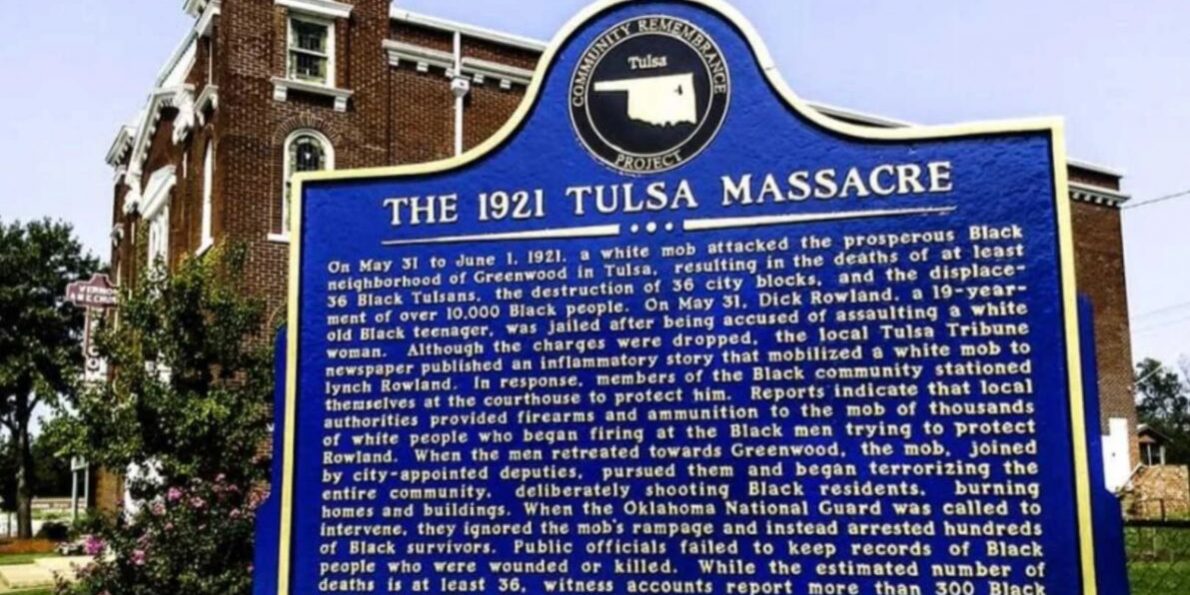 May 31, 2021, marks the 100 year anniversary of the Tulsa, Oklahoma Greenwood massacre. The event began on May 30th with two teenagers, a Black male and white female, in an elevator in the Drexel building in downtown Tulsa which developed into a sexual assault accusation. The Black teenager was arrested and on May 31, 1921, a mob of more than 1,000 white men descended on the jail. In response, more than 50 Black men came to the aid of the police defending the jail. When these outnumbered Black men retreated to Greenwood, a predominantly Black affluent neighborhood, the white mob attacked its residents and burned their homes, businesses, churches, school, and hospital. The massacre was over in less than 24 hours. Thedestruction was staggering: 35 blocks burned to the ground; as many as 300 dead; hundreds injured; 8,000 to 10,000 left homeless; more than 1,470 homes burned or looted; and eventually, 6,000 detained in internment camps.
This historic and horrendous event has been willfully buried in history. The full magnitude of the community’s economic loss, documented in the Atlantic is still coming into focus even on the centennial of the event —in part because new digital tools allow scholars to mine census records for data about its aftermath. This New York Timesarticle, piecing together archival maps and photographs, with guidance from historians, has constructed a 3-D model of Greenwood.
Listen to survivors of the Tulsa race massacre share their memories of Greenwood before a White mob attacked the affluent community 100 years ago in “Tulsa 1921: An American Tragedy.” The special airs Monday, May 31, at 10 p.m. ET on CBS.
Tulsa is currently taking action to find and identify victims who were buried in mass graves. MSN describes some of this activity. The aforementioned Atlantic article discusses the case for reparations and the tragedy of the Trump Tulsa rally. Both the New York Times and Atlantic articles provide an outstanding overview of this tragic event.
Categories: In The Spotlight, Newsletter HighlightsMay 27, 2021Leave a comment
Tags: activismamerican historygovernmentpeoplepoliticsprogressivetulsaUnited States