On June 4th, Americans observed National Gun Violence Awareness Day, also known as Wear Orange Day. Starting in 2015, the first Friday of June and the following weekend have become an annual opportunity to honor the victims and survivors of gun violence, a public health crisis that kills nearly 40,000 individuals yearly and injures many more. Orange is the symbol of this somber occasion as it was the favorite color of Hadiya Pendleton, an accomplished Chicago teen who was shot to death in 2013 just days after she performed at President Barack Obama’s second inaugural celebration. Pendleton’s grieving friends encouraged others to wear orange to honor her life and memory.
Designating an annual day of remembrance helps us shine a necessary spotlight on the shameful, preventable scourge of American gun violence. More importantly, yearly observance motivates us to recommit ourselves to reparative action and advocacy. However, deaths and injuries from firearms are not confined to a single day of the year. As Marjory Stoneman Douglas High School shooting survivor David Hogg recently tweeted, “No other high income country turns on the news Saturday morning to hear how many were killed in mass shootings the night before. It doesn’t have to be this way.”
The following examples of high profile shootings illustrate the depraved chronicity of mass gun murder in America. Tragically, this list is far from exhaustive.

1/8/2011 – 6 people were killed and 13 others, including Congresswoman Gabriel Giffords, were injured at a Congress on Your Corner event in Tucson, AZ.

5/31/2019 – 12 people were killed and at least four were injured at a public works building in Virginia Beach, VA.

Despite an alarming recent increase in the frequency of mass shootings (defined by the Gun Violence Archive as incidents in which four or more people are shot and/or killed, not including the shooter) it is important to remember that these events represent a fraction of overall gun deaths. Critically, suicides account for approximately 60% of gun deaths annually, yet this fact receives little public attention.

For those who have lost loved ones, and for survivors who suffer the lifelong effects of their physical and emotional wounds, every day brings fresh anguish. We must not let ourselves become numb or hopeless. There are common sense steps that we can take to curb the violence, to save ourselves, and protect those we love.

Although today is not officially Gun Violence Awareness Day, today is as good as any other day to advocate for sensible gun reform. Every day is the perfect day to contact elected officials to demand universal background checks, red flag laws, and a ban on assault weapons of war.

Every day is the right day to make sure that firearms in the home are stored safely: locked, unloaded, secured in a locked safe or storage container, with ammunition locked in a separate location.

Every day is the perfect day to wear orange in honor of Hadiya Pendelton and all others whose lives have been shattered by guns.

Every day is the right day to work together to create a safer, saner, more civilized society for our children and future generations.

Every day is the perfect day to take action. 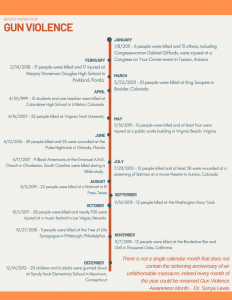