Time is of the Essence: Bipartisanship in the Special Immigrant Visa (SIV) process 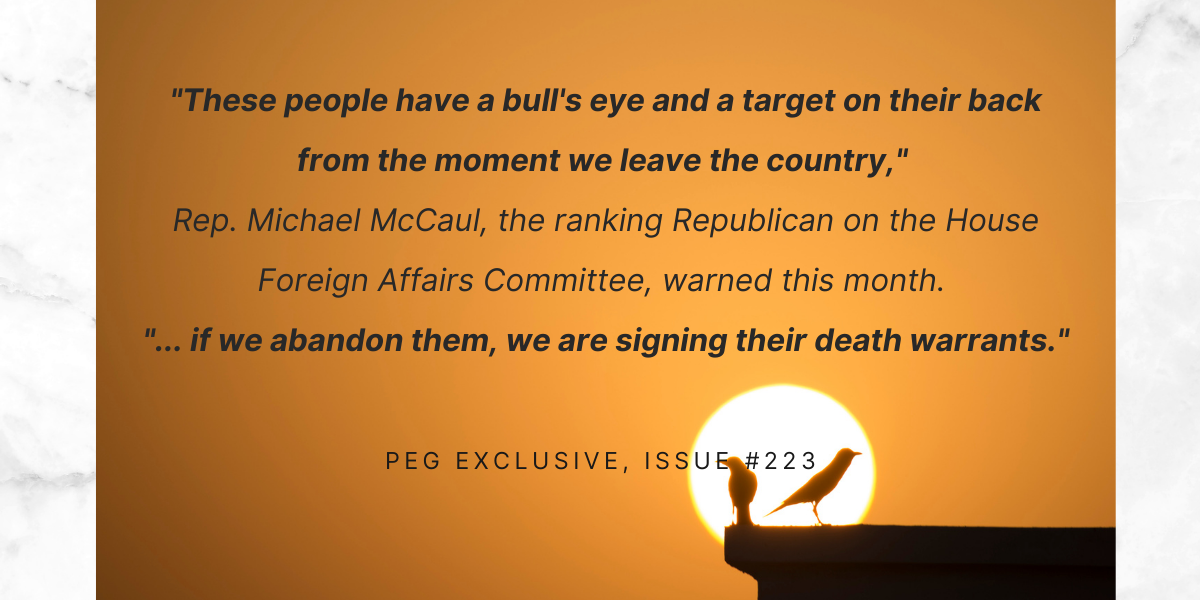 Bipartisan calls from Congress are putting pressure on the State Department and the Biden administration to accelerate SIV processing. “These people have a bull’s eye and a target on their back from the moment we leave the country,” Rep. Michael McCaul, the ranking Republican on the House Foreign Affairs Committee, warned this month. “And if we abandon them, we are signing their death warrants.”

The Department of State’s authority to issue Special Immigrant Visas (SIVs) to Afghan nationals under section 602(b) of the Afghan Allies Protection Act of 2009, as amended. This program is available to Afghan individuals who have worked as translators, interpreters, or other professionals employed by or on behalf of the United States government in Afghanistan for at least two years. Those who are eligible for SIVs and their dependents can apply through either of two programs, the translator/interpreter program, or through the broader Afghan national program. As one of multiple special immigrant categories, these programs are designed to benefit our allies in Afghanistan by providing a direct pathway to a green card.

While a bipartisan group of Representatives and Senators have been vocal about the need to create an evacuation plan and expedite SIV processing, Congress must act to change some of the restraints that exist in the process. The number of available SIVs is set by congressional statute. The Department of State, Foreign Operations, and Related Programs Appropriations Act in 2021 caps the number of visas allocated for Afghan nationals at a total of 26,500. The Truman Center has projected the cost of removing the 70,000 SIV candidates and their family members from Afghanistan at almost $700 million, about $10,000 per evacuee.

The New York Times has reported that more than 18,000 Afghans who have assisted America during the last 20 years are stuck in a bureaucratic morass after applying for Special Immigrant Visas with some waiting as long as six or seven years for their applications to be processed.  Chronic delays and logjams have plagued the SIV program for more than a decade. Democrats have accused former President Donald J. Trump of exacerbating the problem by starving the program of resources and staffing. The coronavirus pandemic intensified these problems, especially with a recent surge in cases at the embassy in Kabul which shut down in-person interviews and vetting.  The number of backlogged cases doesn’t count family members, an additional 53,000 people, or the anticipated surge in applications as American troops withdraw.

A group of Republican and Democratic senators Legislators have introduced several bills, such as the one in mid-June that would lower the SIV eligibility requirement from two years of service to a single year. It would also postpone expensive medical evaluations and provide special immigrant status for certain surviving spouses and children of applicants who have been killed. Politico reported that the House is set to vote this week on legislation to allow applicants to be approved for special visas more quickly.

There needs to be a safe place to house and feed these American allies while they work through the immigration process.  This week the Pentagon press secretary John Kirby said Fort Lee will briefly host up to 2,500 applicants and their families who have completed the security vetting process. While at Fort Lee, Kirby added, they will be able “to safely complete the final steps” of the process, including final medical screenings and other paperwork. Kirby added that the Defense Department is looking at potentially housing some of the 2,500 at separate military installations, but declined to share additional details.  The group heading to Fort Lee includes 700 who qualify for the SIV program; the remaining 1,800 Afghans are their family members.

Several non-profit agencies are also working to assist Afghanis as the US withdrawal from the country and Taliban gain rapid control. Many fear retribution from the Taliban for their roles in helping the U.S. military during its nearly 20-year operation in Afghanistan.  NPR reports several stories of threats by the Taliban to Afghanis while they await working through the SIV process.  Many have been killed while waiting.

Although both parties, the White House, the Pentagon and the State Department commit to assisting getting Afghanis out, the process is slow and there needs to be places outside of Afghanistan to house these people while they work through the SIV process.

TIME IS OF THE ESSENCE! A senior administration official said that “transportation out of Afghanistan will not come with any assurance that a visa to the United States will be granted.” The New York Times states that it was unclear whether people who somehow do not qualify would be sent back to Afghanistan.