The “Big Lie” and a host of other medium-sized ones

You are here:
Newsletter HighlightsUncategorized 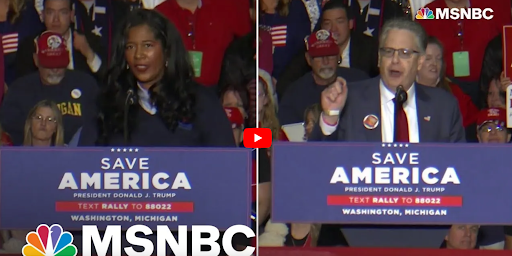 Rachel Maddow reports on Michigan Republicans choosing two 2020 election conspiracy theorists as nominees for Secretary of State and Attorney General while a Republican member of the election board quit over the party’s preoccupation with “delusional lies.” See 2 min video here. –MSNBC on Youtube

Two political newcomers who were endorsed by Donald Trump won Michigan Republicans’ backing at a convention Saturday, clearing their path to face Democratic incumbents in the fall.

The meeting of thousands of delegates was a test of Trump’s clout in the party. His allies – attorney general candidate Matthew DePerno, a lawyer, and secretary of state candidate Kristina Karamo, a community college instructor – emerged victorious from three-person fields at the 10-hour “endorsement” convention in downtown Grand Rapids. Read more here. –The Guardian

The “Big Lie” lives on in Michigan

The Big Lie. That’s what some have taken to calling former President Donald Trump’s false assertion that the 2020 election was stolen. But if you thought that all the investigations, reporting, and debunking meant that Trump loyalists had moved on, you’d be sorely mistaken.

Some candidates ground their speeches and messaging in false narratives of a stolen election in 2020. Election deniers are setting their sights on the state office that oversees all voting in Michigan: the Michigan Secretary of State’s office. Listen to the 19 min podcast here. -MichiganRadio.org Stateside

And listen to a 51 min deep dive about how the Big Lie is shaping Michigan’s next election, by journalist Byard Duncan for Reveal: Campaigning on the Big Lie

Tapes reveal GOP plan to contest elections: ‘It’s going to be an army’

Video recordings of Republican Party operatives meeting with grassroots activists provide an inside look at a multi-pronged strategy to target and potentially overturn votes in Democratic precincts: Install trained recruits as regular poll workers and put them in direct contact with party attorneys.

The plan, as outlined by a Republican National Committee staffer in Michigan, includes utilizing rules designed to provide political balance among poll workers to install party-trained volunteers prepared to challenge voters at Democratic-majority polling places, developing a website to connect those workers to local lawyers and establishing a network of party-friendly district attorneys who could intervene to block vote counts at certain precincts.

His chief of staff knew it wasn’t true. So did his vice president, his attorney general, his chief legal counsel and his secretary of education. So did Republican members of congress, some of whom worried they might face prison time for indulging their defeated president’s groundless claims of electoral fraud.

And so, of course, did Donald Trump himself.

And yet, a year and a half later, the conviction that America’s election machinery is fundamentally compromised not only persists, but continues to metastasize. And nowhere has it flourished more virulently than in Michigan, where five Republicans competing to challenge Gov. Gretchen Whitmer’s re-election are setting the stage for a 2022 sequel to the Big Lie.

Earlier this month, when Michigan Radio’s Rick Pluta asked GOP candidates participating in their party’s first gubernatorial debate if they’d “accept the results of the August primary and the election in November as a fair and accurate reflection of the will of the voters,” only one committed to do so.

The rest agreed it’s too early to say whether the candidate who gets the most votes in those elections should be considered the legitimate winner. Republican gubernatorial candidate Tudor Dixon talks during the MIGOP State Convention.

“We have to wonder what will the secretary of state do when it comes to the 2022 election,” said Tudor Dixon, who maintains that incumbent SOS Jocelyn Benson presided over rampant voter fraud in 2020. “If we see the secretary of state running a fair election, then that’s a different story,” Dixon said. “But we don’t know what she’s going to do.”

Help Get the Voter Guide to People